Ring doorbell video shows a bear in Tahoe opening a car door and jumping inside. (Adam A, YouTube) 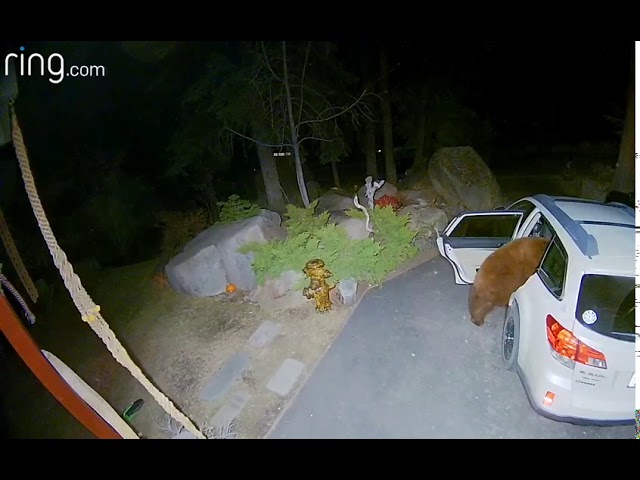 YouTube: Bear in Tahoe Opens Door to Car and Jumps In

BEARMAGEDON HQ — I've been pretty understanding with the Bearpocalypse up until this point. I mean I'm not OK with it, but war is war and certain things are understood.

They're learning to walk like humans, scale sheer rock faces and use espionage to try and gain knowledge into our law enforcement efforts. Somehow this feels like the bears are crossing a line — one I'm not comfortable with. Even war has rules, and you bears seem to be ignoring them.

This video is from 2019, but my sources tell me the bears have been working hard to keep it hidden because it does not make them look good. But some true-to-the-human alliance got ahold of the footage, likely while putting themselves at great risk, and made me aware of it so I could share it with the masses.

In the video, the bear strolls up to a car parked in a driveway. Most believe bears can't open doors, but we know better. This bear pops open the back door and brazenly jumps in the back seat. Unfortunately, we do not have footage inside the car, but I don't need it to know what's going on in there.

The bear was hoping to steal the car. If they could get their hands on one, they believe they can replicate the engineering and build their own fleet of vehicles. The last thing we need is the bear army to be mobilized with motored vehicles. Fortunately for us, the lack of thumbs proved difficult for the bear — as did the distance to the pedals with his short little legs.

Adam, the uploader of the video, is clearly not aware of the impending Bearmageddon and wrote, "Luckily it didn't ruin anything. You couldn't even tell it had been in there," on the YouTube description.

Of course, he didn't mess with anything, Adam. He wasn't there to mess up the vehicle; he was there to steal it. When he realized he couldn't make a clean getaway with the car, he bailed hoping to leave no trace of his presence. But he didn't look for security cameras beforehand. This is obviously a newer bear soldier and I have no doubt his superiors gave him an earful when the tape was discovered.

Stay vigilant, friends. Bears are now trying to steal our cars. Who knows what they'll try next.

Incredible flipbook made with 1 sheet of paper

The patience and talent required to do this is something I will never possess.
×