Have You Seen This? The paint-can drum cover of Rush's iconic 'Tom Sawyer'

THE PAINT SHED — When I was a kid, I had two favorite TV shows and both were a little odd to be the favorites of a child. One was called "Quantum Leap"; the other was "MacGyver."

"Quantum Leap" is of absolutely no consequence to this video or the point I'm trying to make. However, I will get a nod to "Quantum Leap" any time I can.

As for "MacGyver," I'm not talking about the reboot that started in 2016. I'm talking about the O.G., Richard Dean Anderson classic that ran for seven glorious seasons starting in 1985. If you aren't aware of the show, then my heart breaks a little for you (and if you also have never heard of "Quantum Leap," then you might be a lost cause).

Anyway, Anderson played, Angus "Mac" MacGyver, but you only need to remember the name MacGyver. The man was a secret agent who could get out of any situation with nothing but a paperclip, some sidewalk chalk, an old gum wrapper, and some good old-fashioned science.

The show was awesome, and those of us who watched it have all wanted to "MacGyver" something at some point in our lives. The times I've MacGyver'd a bumper back to working order, a trampoline in jump-ready condition, or a dinning chair back to a free-standing up-right position are too many to count. Truthfully, about 98% of that was done with duct tape, but still, I MacGyver'd it.

YouTuber Deden Noy not only has mad MacGyver skills, but he's also got some incredible drum skills. And in his videos, he marries these two talents. Noy has put together a 13-piece drum kit made out of paint cans, tape and what looks like a smattering of saw blades and metal lids. Noy has multiple videos, but this one from September 2020 is one of the best.

In the video, he plays the Rush classic "Tom Swayer."

Rush drummer Neil Peart was known as one of the greatest rock drummers ever, as well as for his complex rhythms and massive drum kit. Noy keeps up with Peart in the video and manages to make these old "tin cans" sound pretty great.

Check out the videos and some of Deden Noy's others, and then watch "MacGyver" if you haven't.

And if you haven't seen "Quantum Leap," do yourself a favor at watch it, as well. 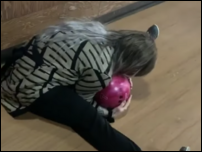 Somethings can't really be explained but need to be seen to truly understand. This is one of those moments.
×