Have You Seen This? Foul ball leads to good deed

Have You Seen This? Foul ball leads to good deed at Phillies game ( CBS Philly, Twitter)

THE BALLPARK — Most of us have tried at one time or another to catch a foul ball at a baseball game. But how many times have we been successful? Each time I lunge for a foul ball, I either end up falling painfully onto the seats below me or accidentally spilling someone's popcorn.

Sometimes a foul ball is not only caught, but also leads to a good deed. Check out what happened at a recent Phillies game.

The ball ended up passing through several outstretched hands and landed at the feet of some lucky fans. A young boy was closest to the prize and proudly brought it back to his dad.

But another family had also hoped to get the ball, and their youngest daughter was struggling to process the wild emotions that come from having a foul ball land just feet away from you only to have it be snatched up by another fan.

So what did the boy do? He gave away his prized catch — and the hug he gets from his dad after his generous act is the perfect conclusion to this brief little masterclass in human goodness. 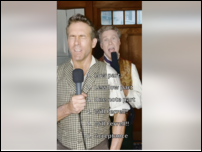