Have You Seen This? Dog hides around corners to scare its owner 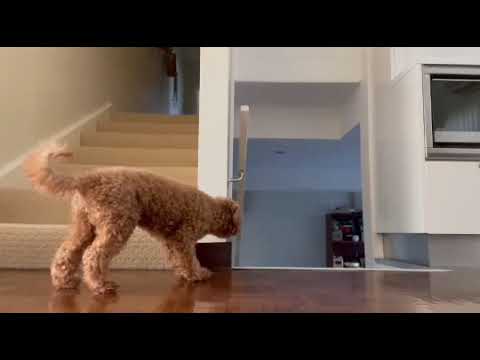 HOME SWEET HOME — Is your dog your best friend?

If so, what does that mean? Does that mean they're happy to see you all the time, that they feel bad when they get into the garbage, that they don't leave your side when you're sick?

The goldendoodle in the featured video shows none of those dog-is-my-best-friend characteristics.

Instead, like a proper horror movie villain, this dog is all about the jump scare. You know, that thing where everything is going along well, you're almost safe, then boom! Out of nowhere, the big bad thing jumps into your path.

While the initial effect may be similar, the motivations of a horror villain and the dog in the video are very different — the villain certainly wants to kill you, and the goldendoodle just wants to have fun.

In the video, the dog listens for its owner to come up the stairs. Then, just at the right time, the pup jumps out and gives its owner a little fright.

The first time, you may think it's simply "right time right place" timing. But by the end of the video, the third scare, you realize that the dog is a very smart and sneaky little snake.

For the first two scares, the dog hides on the same side of the stairs. But the third scare turns out a little differently. This time, the owner has caught wise. She comes up the stairs slowly and looks to her right, where the dog usually hides. But the pupper has upped its game. It's now hiding on the other side of the stairs and thus is able to give its owner another little fright.

It's the sweetest scariest jump scare you may ever see.

Have You Seen This? Dog hates his nightly walks

It concerns me how much I relate to this dog. I think I need to make some changes in my life.
×