WINTER WONDERLAND — Pandas are one of those animals that manage to look adorable even when they're doing something as pedestrian as leaning against a tree while lazily munching on bamboo. But there are special times when their cuteness reaches extreme levels that can only be touched by elite species such as koalas, hedgehogs, sloths and fennec foxes.

Exhibit A for this argument is the video recently shared of a panda family at the Smithsonian's National Zoo. Mei Xiang and Tian Tian are seen frolicking in the snow and teaching their cub, Xiao Qi Ji, how to properly celebrate winter.

According to a report from NBC4 Washington, this is Xiao Qi Ji's first time experiencing snow. So, perhaps his parents were going above and beyond to show the cub how to make the most of winter weather. Despite their best efforts, Xiao Qi Ji only spent a few minutes outside before returning to the warmth of the indoor habitat.

If you want to see more of this panda clan, you can always watch them live on the zoo's "Giant Panda Cam." 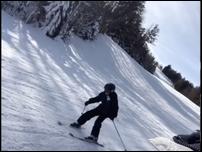 Kid with existential crisis on the slopes is all of us

Sometimes you just gotta scream as life hurtles you down a hill.
×