Have You Seen This? This kid may be the world's smoothest trick or treater

Halloween may be over, but this kid's swag is just beginning. (@davidwade on Twitter)

THE STREET — Halloween has come and gone, and now kids everywhere have way too much candy and parents are trying to hide it.

As an adult, I still think Halloween is fun; but as a kid, it was the ultimate holiday. You got to dress up and you thought about what you were going to be for months. Sometimes you planned it out years in advance: "This year I'm going to be an Ewok, but next year I'm going to be a Thundercat. The year after that I'm going as a dead football player. And after that, I think I'll be more grown-up and sophisticated, so I'll probably go as Indiana Jones."

On top of that, you got to go house to house with your friends and your empty pillowcase and bug your neighbors for candy all night. You got to do it even if it was a school night. Halloween was epic as a kid. For me, I was just running as fast as I could to each door to get more booty. But the kid in this video is all class. He is as cool as the other side of the pillow. He may be getting candy, but he's dishing out handfuls of swagger.

A doorbell camera caught something coming up the driveway. It can't be a car, it's too small. But it's moving like a car. That's because it's a Power Wheels. That's right, it's a Jeep Power Wheels and this small dude rolls up to the candy bucket and stops on a dime.

He then hops out in what appears to be a fireman outfit — I could totally be wrong — and heads for the candy. He grabs what he's been allotted, puts it in the stash bag in the back of the Jeep, and then sings a little song to commemorate the occasion of free candy.

He then climbs back into the vehicle, throws it in reverse, and does a solid two-point turn to hit the next house.

This kid has this trick-or-treating thing figured out, and I hope to be as cool as him when I grow up. 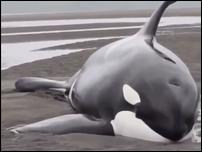 Have You Seen This? Killer whales pull shocking stunt at low tide

Is there anything more terrifying than orcas on the hunt? They're as tenacious as they are voracious.
×