Have You Seen This? Man charms geese with harmonica 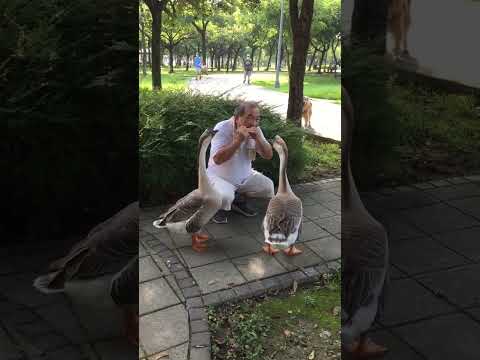 TAIWAN — As the original saying goes, music has charms to soothe the savage beast.

But if you think about it, what music were they talking about and which beast? Unless you're talking about snake charmers, you may find it difficult to remember seeing an example. You're probably just thinking about all the videos you've seen of dogs howling at music.

Well, today is your lucky day because this featured clip is an incredible example.

Everyone knows that geese are territorial and often mean creatures. You take a step onto its "property," and you may be chased far and wide beyond while an implacable goose pecks at you with murder in its heart and eyes.

With that in mind, it may seem like a good, last-effort idea to try to distract a grumpy goose with music. It can't very well make things much worse. So that's just what a man in Daan Forest Park in Taiwan did.

But here's the thing: The instrument of choice for the man is a harmonica, which is not exactly known as being on the "soothing scale" of musical instruments. Yet, the video shows a man crouching in front of two geese, serenading them with his harmonica.

The geese are not only calm but they are highly engaged and interested in the "soothing" music. They even make interested honks and totter closer to the man without displaying even a fraction of a grump.

It's beautiful and hilarious.

Author's note: Although implied for entertainment reasons, this author has nothing against harmonicas and finds them delightful in the hands of practiced players. However, she has heard way too many children making harmonicas seem like a death knell, so also harmonicas are not great.

The band, not the shooter, takes their shot during a drive-by.
×