Utah Warriors players unveil the blue-and-white, limited-edition Iosepa jersey, inspired by the history of rugby in Utah and the ghost town of Iosepa near Skull Valley. (Courtesy: Utah Warriors) 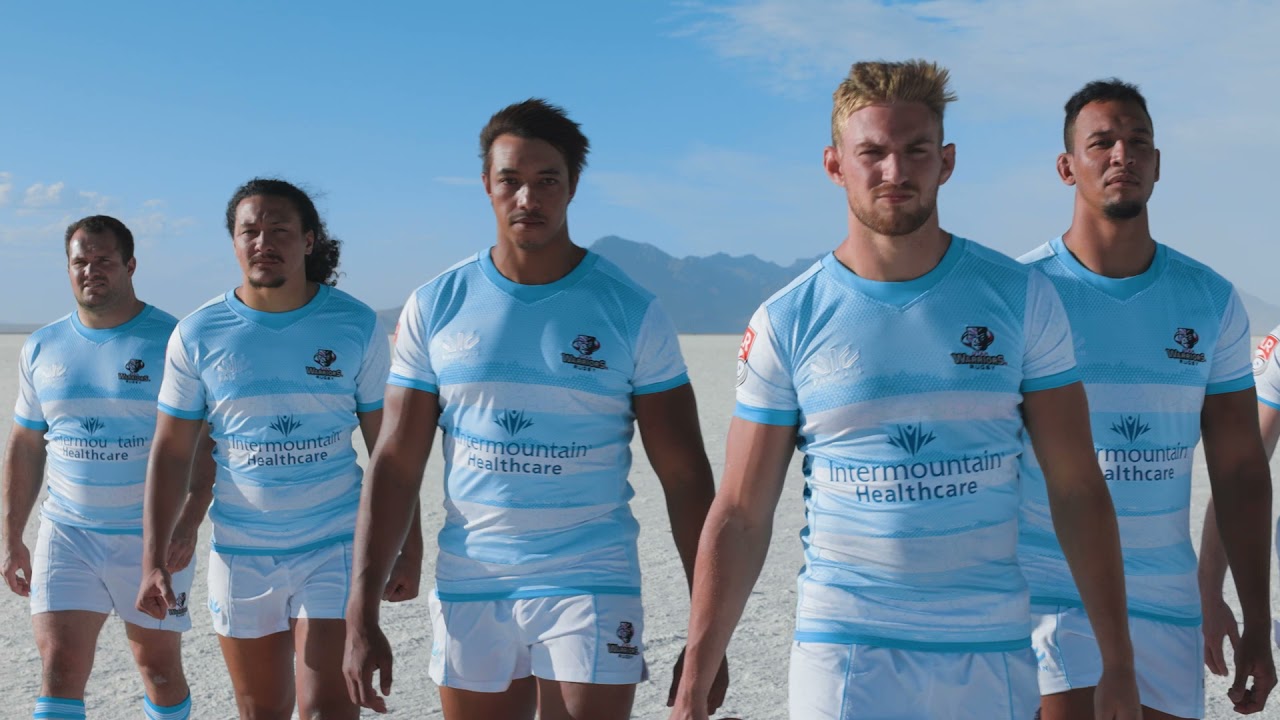 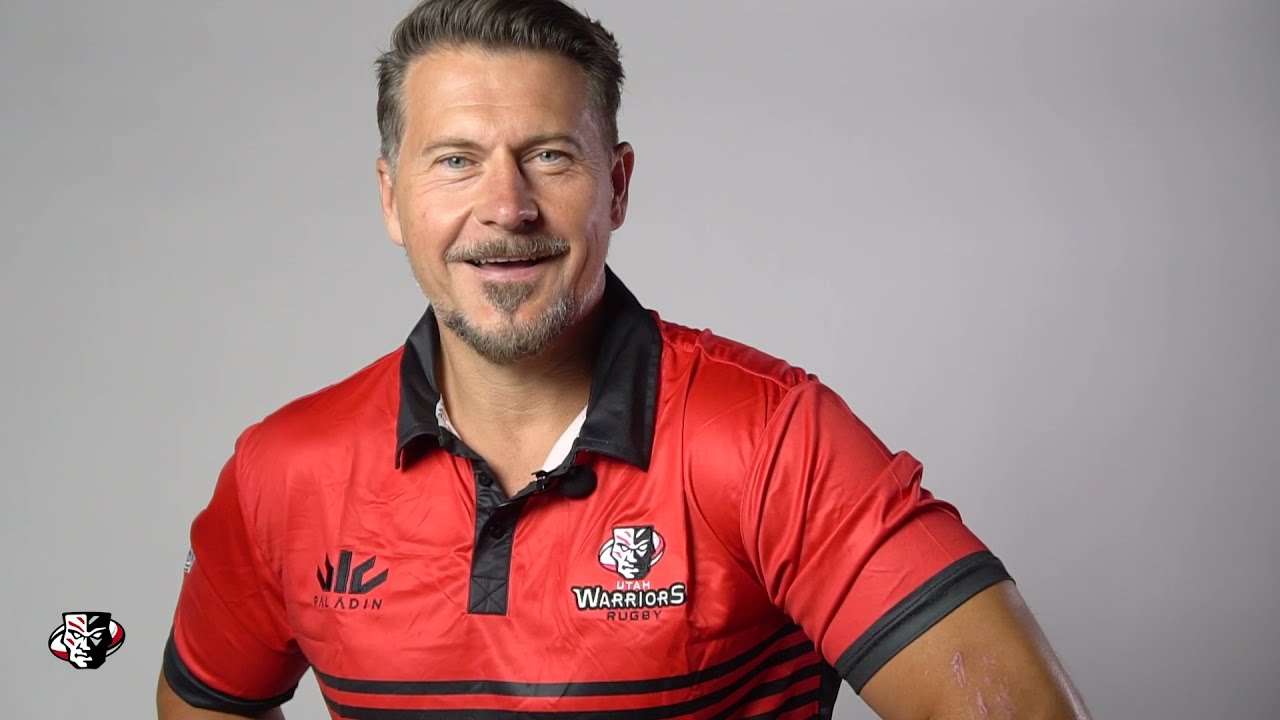 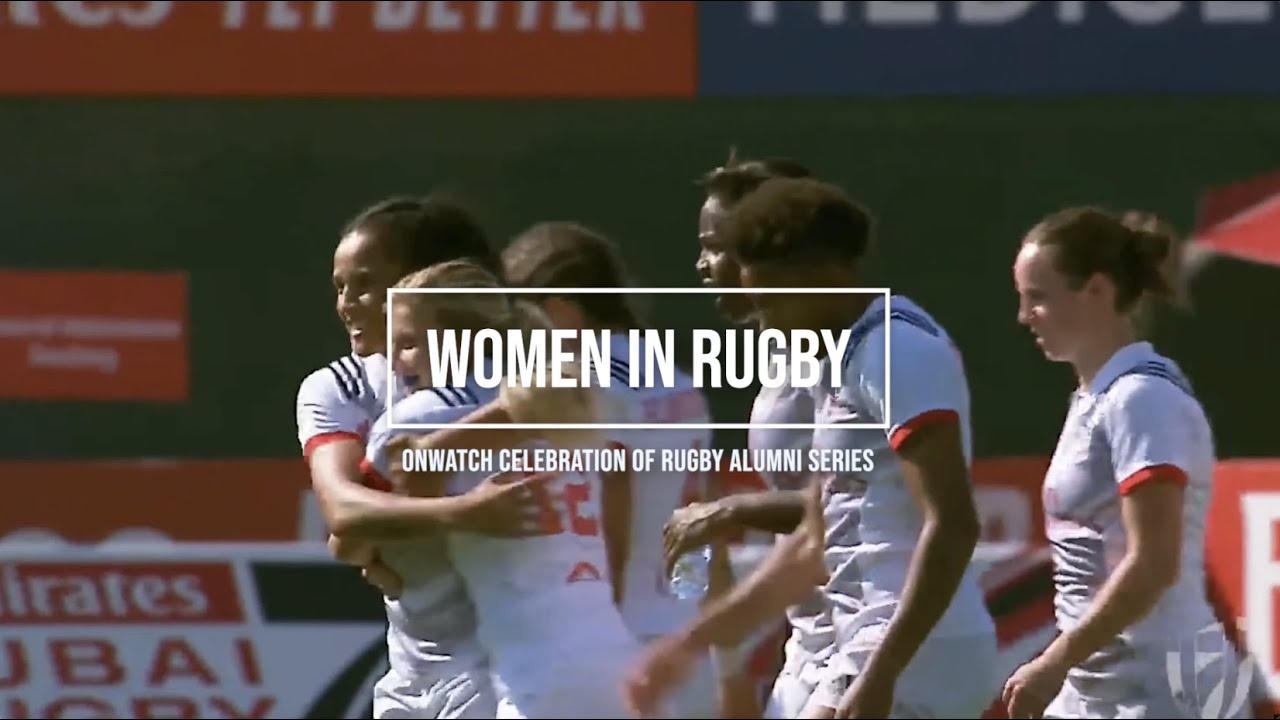 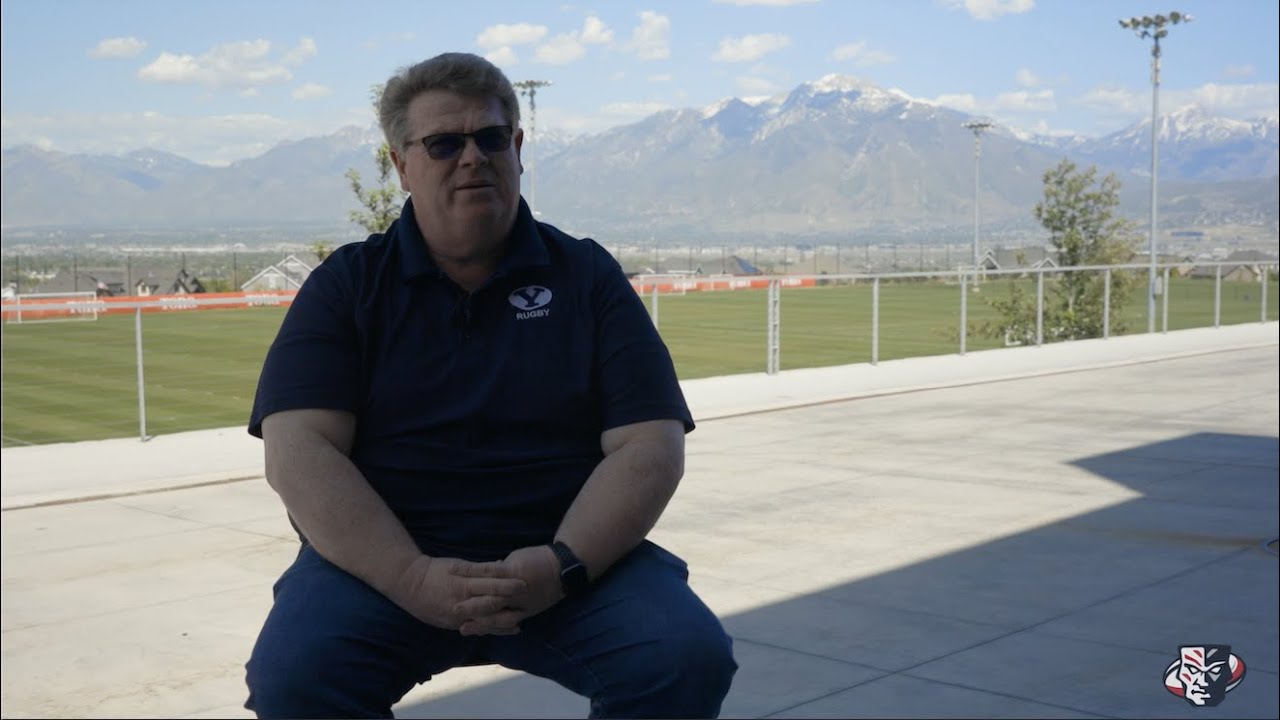 But the state's fourth-year professional rugby outfit will celebrate a lot more than one season's worth of accomplishments in its penultimate home match of the season.

The third-ranked Warriors (9-5-0) will celebrate the sport with a full day of rugby-related events, activities and a youth tournament. The club will also honor alumni of the sport in its many forms, like former Highland Rugby coach Larry Gelwix, former BYU coach David Smyth, and members of the Herriman High School club that recently won a national championship, among others, during halftime, as well as a post-match fireworks show.

The club will also debut the Iosepa jersey, a strong deviation from the traditional red-and-black design that has been present in the Warriors' branding since they launched in Major League Rugby four years ago. In its place, players will wear a white jersey and shorts with ice-blue stripes, a silhouetted mountain range, and detailings reminiscent of the cracks in Utah's acclaimed Bonneville Salt Flats.

"A lot of the remnants of what we see in the Salt Flats are things collected over time," said Warriors creative director William Racule, who designed the uniforms. "That ties back into how rugby is in the state of Utah: over time, cultures have been brought in, and it created a platform where we have a known history to create professional rugby."

In many ways, the limited-edition jersey, which will be auctioned after the match to benefit the Utah Warriors Rugby Foundation that aims to grow the game in the local youth communities, is a love letter to the sport, to Utah and to a community of people that helped bring rugby and the culture of the Pacific Islanders to the state more than 100 years ago.

It all started in the deserted town of Iosepa.

Established in 1889 as a colony for early members of The Church of Jesus Christ of Latter-day Saints from Polynesia and the Pacific Islands to emigrate to Utah to help work on the Salt Lake Temple, Iosepa was founded on the former site of John Rich Ranch — a 1,920-acre plot of land near Skull Valley, not far from modern-day Grantsville and around 70 miles southwest of Salt Lake City.

Many initially settled in the Salt Lake Valley, but when "cultural and societal problems" arose with the early settlers, the church's First Presidency formed a committee that established the Polynesian colony, according to scholars from Brigham Young University.

After reports of leprosy and other diseases circulated in the local press at the founding of the colony, settlers grew the barren wasteland in Utah's west desert into one of the larger towns of Hawaiian and Pacific Islanders in the west in the 19th century, complete with a sawmill, church and school. While most came from Hawaii, the town also included Tongan, Samoan, Fijian, Maori, Portuguese, Scottish and English residents.

Most of Iosepa's residents came to the area in order to live closer to the Salt Lake Temple. Initially a town of a few dozen, community members were hired to work on the ranch, and the community of Iosepa — named after church president Joseph F. Smith, who was among the first missionaries to Hawaii — grew as large as 228 at its peak in 1918.

The blending of languages, cultures and customs in the small town continued for years until 1909 when the town's children and teenagers spoke English "exclusively in school and prefer it to their native tongue in conversing with the whites and much of the time among themselves," according to one report in the Deseret Evening News at the time.

Utah's Pacific Islander community numbers more than 44,000, according to the 2017 U.S. Census, including just over 39,000 Polynesians (defined as "native Hawaiians, Tongans, Samoans, and others"). And a huge portion of them have roots in Iosepa.

"I think Iosepa means a great deal to the Polynesian people of Utah," said Hema Heimuli Jr., a sports producer for BYUtv with Tongan and Maori bloodlines and a descendant of one of those Iosepa families. "It was the primary introduction for a lot of Pacific Islanders to the valley, and a lot of Polynesians here locally — including myself — have roots that are currently buried in the cemetery in Iosepa.

"For people like me who relate, it's a point of reverence, a point of history, and a point of pride that these people endured what they endured for their beliefs."

Initially settling in the Salt Lake Valley, Iosepa's residents were moved to Skull Valley under the direction of the church's First Presidency after experiencing culture shock and occasional mistreatment by some white settlers, according to reports in the Salt Lake Tribune at the time. So they kept walking — nearly 80 miles to the west, to an inhospitable land eventually bloomed into civilization.

Many of them regularly walked back, too. Stories passed down through generations have told of Iosepa residents walking for several days to Salt Lake, either to help build the temple or — when it was completed — to perform temple work in those walls.

"Iosepa is the Pacific Islanders' tie to the pioneer movement," said Racule, whose grandfather emigrated to Hawaii from Fiji to help build the Polynesian Cultural Center.

In 1915, President Smith — by then the fourth president of the church — announced plans for a temple in Laie, Hawaii, the first temple built outside of continental North America. While church leaders did not directly advise members of Iosepa to emigrate to Hawaii, they did offer to pay for passage to anyone who wished to move and could not afford it, leading some historians to believe there was undue pressure forced on the citizens of the town to return to the islands.

Whether intended or not, by the time the Laie temple was completed in 1919, most of Iosepa was a ghost town and the land was sold to the Deseret Livestock Company. The rest of its residents scattered either to the islands or to smaller communities in the Salt Lake Valley.

All that remains of the original town is a cemetery and a fire hydrant, the site of an annual reunion for descendants of those families.

In 1971, the Iosepa cemetery was added to the National Register of Historic Places, and in 1989, a monument was installed on the site to honor and remember the people of Iosepa.

"This was not the desert we see today," said President Gordon B. Hinckley, then-First Counselor in the First Presidency, at the time. "This was once a beautiful community and a part of a large mosaic of communities that our people established all over the West, in Utah, Arizona, Idaho, Nevada and California — 500 communities, at least, and among them stood Iosepa as a gem, a paradise, brought from the islands of the Pacific to the desert of the West."

What does Iosepa have to do with rugby?

Rugby's commitment to the past is baked into the sport, with players often "inheriting" a number rather than choosing one for themselves on many teams.

But the internationally renowned sport that continues to grow in popularity in the United States has a unique place among the culture of the Pacific Islands. Many of those settlers who came to Utah for religious reasons also brought their own languages, customs and their favorite sport.

When the Warriors wear the Iosepa jersey July 10 against Rugby ATL, they will do so with hopes of honoring the community that brought the game to Utah — along with the rest of the rich traditions of Utah's Polynesian community.

Rugby was just one tradition brought to Utah from the islands, but it's a key tradition for the professional club that calls Herriman home.

"I felt like the Warriors needed an opportunity to bring all that back into our picture," Racule said. "Preparing for 2021, I needed to present Iosepa in a way that was well-received."

Everything about the jersey is a tribute to Utah, the Pacific Islander community, rugby and the tiny ghost town that brought them all together at the end of the 19th century. Triangles dot the details of the front of the shirt — spread across the chest, just under the badge, and on the neckline to form the Wasatch Mountain Range.

"Spreading a message through your uniform is a very sports thing to do," said Heimuli, who has already pre-ordered a Iosepa jersey. "For Polynesians like myself, this is representation. It's more than a tribal design; it has a story and a history that is real, and that will resonate with people."

While the triangle is the traditional symbol of the Hawaiian culture, the design is not so distinctly Hawaiian — or even Polynesian — that it would turn off other fans and cultures. Racule hopes the jersey appeals to all Utah residents, and fans of rugby, in fact.

The Iosepa jersey isn't just a tribute to the town or the Pacific Islander communities of the past. It's a tribute to all of Utah, and its connection to the global game of rugby.

"In the Iosepa jerseys, we are creating homage to Utah as a powerhouse in rugby," he said. "If it weren't for the Iosepa community, there wouldn't be a faithful influx of people (from the islands) who came to Utah. Iosepa wasn't necessarily a success, but they created a group of people who voyaged and created a space for themselves in Utah (in the 19th century).

"It was a migration, just like the Salt Flats were a migration that ended in the Utah desert."

Remembering Iosepa plays a vital role in Utah's Pacific Islander heritage. Every year around Memorial Day weekend, thousands of Pacific Islander and Polynesian families return to the historical site where they hold a luau, eat and drink traditional meals, and teach their children various native dances like the Hula, Heimuli said.

It's also an opportunity for these families to give service to their ancestors, cleaning the cemetery and headstones while simultaneously remembering the names of those who went before them.

"It's an opportunity for us to connect to our ancestors by cleaning the cemetery and the headstones, and reading the names of our family," Heimuli added. "Those are the people that we think of while we are attending to the cemetery."

While the town no longer exists, the legacy of Iosepa lives on in the thousands of Pacific Islanders and Polynesians still living on the Wasatch Front.

"It takes a lot to survive in the west desert," Racule said. "Rugby is the exact same; if you pull up the covers and see what is underneath, rugby has gone through ups and downs in Utah; and now it's at a point where it can really take off with the Warriors and Major League Rugby."