Have You Seen This? Cornish grandpa goes viral because no one can understand him

CORNWALL — For as long as there have been people, there has been generational discord.

From "parents, they just don’t understand" to "kids with that dang rock’n’roll music doing the twist," there is often miscommunication and misunderstanding happening.

He’s certainly talking the whole time, and it’s 100 percent in English, but his Cornish accent from Cornwall, England, is so thick that only those in the know can understand it.

Cornwall is located on the extreme southwest tip of England, and the people there are well known for their thick dialect. You can see more of "grandfer" on his granddaughter’s TikTok account.

Reply to @sabrinajaybaby Granfer has a heat of gold ❤️ 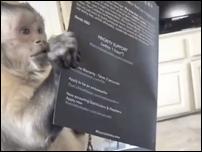 Have You Seen This? Monkey could not be more excited about his new water bottle

This is George. George seems to be a good little monkey, and my assumption is he's curious as well, so don't ask.
×
Martha Ostergar