Have You Seen This? A fly's reaction time is oddly mesmerizing

A fly sits atop an orange prior to a test that will determine how long it takes the insect to react to an arrow being shot through the orange. (kyle gilroy, YouTube) 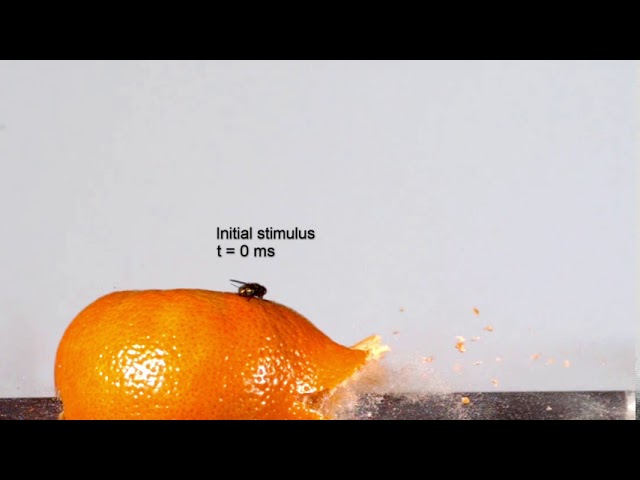 THE ORANGE — I played sports growing up, and athletes often have great reflexes and reaction times. It's important to understand this next part: I played sports, but I wasn't much of an athlete.

Reflexes are not my strong suit. In fact, every time I have had my reflexes tested at a doctor's office, no one has ever found any. Sounds like a joke, but it's true. They hit my knee with that little hammer and nada. Not the slightest movement.

I've learned over the years that medical professionals take this as a challenge. Every visit, the majority of time is spent whacking me with that hammer on my knees and elbows with nothing being done. I usually walk out of there still not knowing what that thing on my neck is because we've used so much time trying to get my reflex going.

In fact, my wife is a medical professional and through eight years of school and 15 years of marriage, I have been her guinea pig on everything from IVs to — you guessed it — reflex tests. Guess how many times she has found my reflexes in all that time? That's right, zero. And she is exceptionally good at what she does.

This may be the reason why I like this video as much as I do, even though there isn't a lot going on in it.

The video is in slow motion as a fly sits atop an orange. An arrow is then shot through the orange and we watch the fly react. This was inspired by research conducted over 70 years ago when someone wanted to see how quickly a fly reacts. This is what they found, according to the YouTube description:

"They found that it took the fly around 21 milliseconds to extend its wings and take flight after falling with gravity a small fraction of an inch. That reaction time is more than 12 (times) faster than that of a human."

The makers of this video used that research to create this captivating 38 seconds.

The most confident tee baller you'll ever see

Sometimes a kid just knows he has it. That, or they'd rather just dance than play the game.
×