Have You Seen This? The full-court golf putt worth $50K

An NBA fan sets up for what would become a full-court hole-in-one putt on the Portland Trailblazers' home court at the Moda Center during a game on March 25. (NBA via Twitter)

THE COURT — We've all been to basketball games where a fan is chosen to come down from the stands and attempt a half-court shot. These lobs rarely go well, with the ball either falling well short of the rim or careening wildly into the stands.

Every so often, however, the shots fall.

My friend hit a half-court shot at a Texas Tech basketball game many years ago. Sinking the shot was supposed to earn him a free truck from a local dealership, but they refused to give it to him.

Turns out, the owners of the dealership were so sure that nobody would make the shot that they had never intended to part with one of their precious trucks. It took the threat of legal action for them to make good on the prize.

If a half-court shot seems difficult, how about a full-court golf putt?

⛳ A fan in Portland wins $50,000 on a full-court putt! pic.twitter.com/hkPSYlungv

At a recent Portland Trail Blazers game, a fan putted from one end of the court and managed to sneak the ball into the front door of a little house at the other end. Amazing, right?

Best of all, there was no drama. Unlike the dealership in Texas that played hardball before my friend could get the truck he won, fair and square, the sponsors gave the lucky fan a check for $50,000. 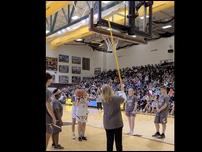 This is the kind of March Madness even non-sportsers can get behind.
×