Have You Seen This? Playing soccer on ice is a thing 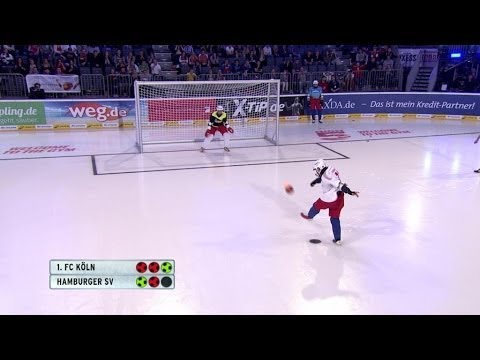 THE RINK — You learn something new every day (hopefully).

Right now you're going to learn about a sport called ice football (soccer).

The rules are soccer-based: get the ball into the opposing goal and don't touch the ball with your arms or hands unless you are the goalie. But of course there are differences. First (obviously), the sport is played on an ice rink, so the players wear hockey gear. But the real kicker is the footwear — the players slide around the rink in bowling shoes. Yes, bowling shoes.

You'd think from start to finish the game would be a chaotic mess with players falling all over themselves and each other. With amateurs, that would definitely be the case, but that doesn't seem to be the case with a players in a practiced league.

This video shows a bit of ice football in action in some sort of semifinal game. (And yes, there are fans in the stands.) This sport is something you should certainly watch rather than read about with a dry description. But let's just say that the physicality of the game looks like a mix between the cautious movements of being on an icy street in winter mixed with the movements of an energetic and determined toddler.

As stated, the only way to really internalize it in all it's glory is to watch it.

Ice football appears to have been invented and played almost exclusively in Germany, which, for some reason, makes total sense.