Have You Seen This? What Nadal does after beaning a ball kid during play

During a match against Federico Delbonis in the 2020 Australian Open, Rafael Nadal hits a ball girl full swing on the head with a stray shot. He goes to her, makes sure she's alright and gives her a kiss on the cheek. After the match, he gifted her his headband and asked if she was really ok. (Diana Allers, YouTube) 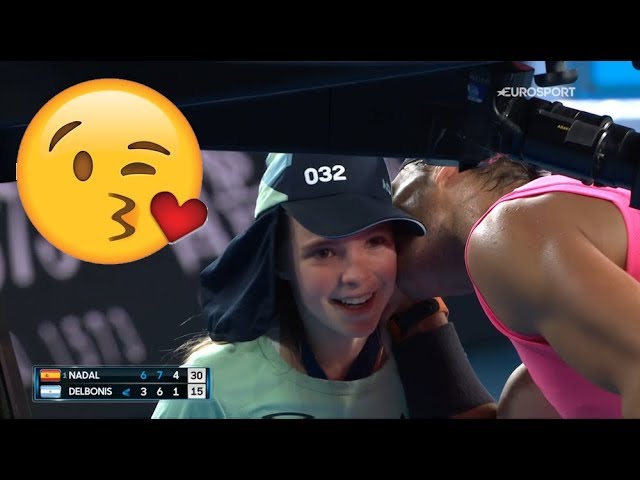 THE COURT — Not many would call tennis the riskiest or most dangerous sport.

Sure, as with any sport, injuries are possible and they happen all the time ... to the players. But what we don't think about is all those people on the sidelines, including innocent children who keep track of loose tennis balls.

Ball kids are integral to keeping tennis matches running smoothly, clearing dead balls from the court as quickly as possible so the game can continue. As tennis lovers, these kids know that their jobs are important, so they are vigilant and take their jobs seriously.

As they keep their eyes on the ball, the last thing the kids expect is that a wild ball will hit them right in the noggin. But that's exactly what happened during the Australian Open 2020 in a match between Rafael Nadal and Federico Delbonis.

In the video, Delbonis serves, and Nadal ends up hitting the ball at a poor angle, making it go wild. The ball shoots right under the chair umpire's tower and slams the net ball kid right in the head.

The crowd makes that special half-sigh, half-shocked noise that only tennis or golf crowds seem to make because they know they must be quiet during gameplay if they want to keep watching the match.

Nadal doesn't miss a beat. He quickly runs over to ask the girl if she's OK. She nods and reassures Nadal that she's fine, and she becomes the MVP of our hearts if not the game.

After the game, the 20-time Grand Slam champ found the girl again to make sure she really was OK, and gifted her his headband. Maybe if she gets enough headbands from tennis stars, she could wrap them all around her head for a little more protection from the next tennis ball assault.