Have You Seen This? Rushed awards ceremony ends in televised trophy disaster

THE BOWLING ARENA — Pete Weber, the legendary bowler, retired this month after more than 40 controversial years on the PBA Tour. His final frame came at the 2021 PBA Scorpion Championship, and it's safe to say that he wrapped things up on a nice note.

All in all, Weber claimed 37 PBA National titles, including 10 major titles. He was the PBA Rookie of the Year in 1980 and became the only professional bowler to win the Triple Crown twice.

In honor of Weber's retirement, it's time to highlight this recently unearthed footage from one of the funniest moments of his career. He had just won the 1991 BPAA U.S. Open and was handed the championship trophy by Wally Hall, president of the BPAA.

Hi, here's probably the best thing that ever aired on television https://t.co/prmuy2gSBUpic.twitter.com/r8405tS255

Weber hoped to give a quick speech to thank his family and supporters, but the tournament was on national television and it was time to wrap things up. The credits began to roll as the no-nonsense interviewer from ABC Sports literally bonked Weber in the face with his microphone and commanded, "Gotta go… say goodbye."

Hoisting the U.S Open trophy high for all to see, Weber attempted to savor the moment. Perhaps the trophy, crowned with a majestic bald eagle, was a little top-heavy. Or maybe a jealous opponent had sabotaged it. Either way, the trophy inexplicably broke in half and the eagle shattered onto the floor.

You can hear gasps from the crowd, while the camera lingers on Weber's embarrassed face.

It's an awkward, endearing and utterly classic Pete Weber moment. 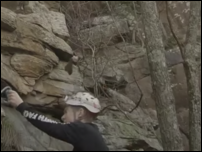 The universe wanted to teach Gavin a lesson about helmets