Have You Seen This? Is it skiing? Is it BASE jumping? No, it's awesome

THE MOUNTAIN AND THE SKY — What's the coolest thing you've ever done? The craziest most impressive feat you've ever accomplished?

It's that thing that people will talk about forever. The thing that is whispered about through your high school halls or college dorm because it was so wicked awesome! That thing you were terrified to do but you said, "Forget it. It's time to become a legend." The thing your kids are going to be exhausted from hearing about from both you and the friends you bring around over the years. The thing you know will be talked about in the eulogy given at your funeral as a hush falls over the crowd because of the reverence and awe felt by the crowd.

Now, realize that thing doesn't matter. It's lame. No one cares and your eulogy is going to be lame.

Calm down, it's not my fault and I'm not being harsh, just spitting truth. The fault lies with skier and whatever else you'd call him Valentin Delluc, and Red Bull. They're the ones who made this video.

Plain and simple, Delluc is flying down a mountain — literally — with a parachute, and then for good measure, he's wearing skis and shredding both powder and the siding of the lodge of the deserted French alpine resort Avoriaz. Delluc is clearly insanely talented and a little insane.

The video is mesmerizing and you'll just shake your head and how incredible it is. Thankfully, Delluc and Red Bull make us feel a little bit better about ourselves when they show some of the "bloopers." They aren't major ones, but at least we can take some solace in the fact that even the mountain magician Valentin Delluc isn't perfect. Just darn close.

Don't feel too bad about your epically incredible and awesome feat that is now not quite so epic, incredible or awesome. Maybe you can show this video at your funeral and let people assume it was you. I know that's my plan. 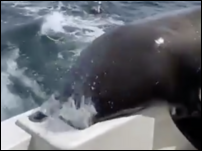 At one time or another, most of us have followed Mary Poppins' advice to feed the birds. But such an event becomes much more intense and unpredictable when a sea lion decides to take matters into its own flippers.
×