Have You Seen This? Bearpocalypse hits the slopes as bear chases skier

BEARMAGEDDON TACTICAL HQ — The Bearpocalypse is fast approaching, and the furry foes are learning and testing new tactics.

If you're not familiar with Bearmageddon, then you need to crawl out from under that rock you've been hiding under and face the reality of the biggest threat humankind has ever faced.

The Bearpocalypse is the inevitable clash when bears attack humans and try to take over the world. The bears have practiced some good old-fashioned breaking and entering, they can now rock climb, and they have even tried to infiltrate our police force to gather information.

Now they're learning how to navigate the ski slopes.

My brother Alex — a faithful soldier in the war against the Ursidae — shared this video with me. Alex is now in hiding as he is in grave danger for exposing this video to the public.

In the clip, a skier is headed down the hill, but right behind him is a bear. Why the skier is still taking things so slowly with a few hundred pounds of resentment and hunger chasing behind him I'll never understand. I'll just assume he has no idea what is stalking him.

Why is the bear doing this? It's obvious: it's practice.

There has long been a myth that in order to get away from a bear you should run downhill. This is nonsense. Bears don't care about slope grade; they care about world dominance, and nothing will get in their way.

This faithful bear soldier is practicing not just getting downhill but also doing it on slick snow. You may be saying, "The guy isn't even going fast and totally got away." That's true, but the bear wasn't trying to catch him.

The bear knew he was on camera. He knows no human will ever be anywhere without that phone at their side. If he attacks, his cover is blown and he sets the Bearpocalypse back. But if he stalks, showing humans they can run downhill, maybe the human could get away and then we all get complacent. We believe we have an escape.

When it gets down to it, this bear is hustling us. It's like a lure on a fishing rod and we're ready to bite.

Recognize the danger, fellow humans. Understand that this is a ploy.

Will we be outsmarted by bears? Will we let Bearmageddon beat us? We will bow down to our bear overlords and let our great-grandchildren be their court jesters? No. We will be prepared. We will be strong. And we will stay united. 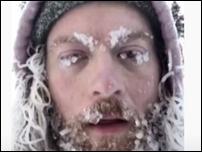 Minnesota is cold and this guy's frozen face proves it

I knew Minnesota was cold, but this man's frozen face puts it in a whole new perspective.
×