Have You Seen This? BASE jumpers leap from the world's tallest building at night

A SUPER TALL BUILDING — The Burj Khalifa in Dubai is the world's tallest building.

It's famous for many reasons, but one is for all of the crazy stunts people pull on it. One of the most famous is when Tom Cruise hung outside the building for "Mission: Impossible — Ghost Protocol."

It's an impressive stunt and one that is thrilling to watch. It's even more thrilling when you see it in IMAX. I can attest to that because my brother-in-law nearly passed out when we watched it.

The two of us decided to check out the movie when it first released, and it seemed we wouldn't be proper action movie fans if we didn't experience it in IMAX. So, Rich and I headed to the theater and had a great time.

When the Burj Khalifa scene started, I learned something about Rich — he's afraid of heights.

I had a big smile on my face watching the impressive scene, and I noticed out the corner of my eye that Rich had not moved. I looked over and not only was he holding his breath, but he hadn't blinked in well over a minute. He was completely motionless except for his hands, which he was nervously rubbing over his thighs over and over again, trying to work out the anxiety he was feeling. I don't think he realized he was doing it; it was just a subconscious coping mechanism for the insanity playing out on screen.

So, let that be a warning to Rich — if he's reading this — and all others like Rich: You may not want to watch this video.

BASE jumpers Matt Munting and Nicholas Scalabrino donned wingsuits and climbed to the top of the Burj Khalifia — and I mean the very top.

Athletes will often jump from a platform way up on the building, but these guys are at the pinnacle of the structure at 1,921 feet above the city. The pair then jumps off as if it's no big deal, soars through the air like superheroes, and then even go between and under a neighboring building. I wasn't rubbing my hands on my jeans, but my face did scrunch up a bit as I watched.

On top of all of this, these guys did this at night. I'm not sure why it's so much more nerve-racking at night considering how bright Dubai is, but it manages to add another level of anxiety for the rest of us.

Everyone enjoy the video ... except for you, Rich. It may be a little too much. 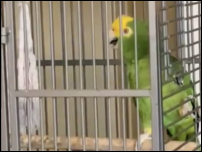