Have You Seen This? Swimming with animatronic dolphins

NEO-SEA WORLD — I had major anxiety about spending money when I was a child. Any cash from relatives, allowances from chores, and even random $1 bills my mom would hand us in the Dollar Store to buy ourselves something fun as she shopped went directly into the purple plastic piggy bank I never opened.

"What if I don't have enough money for an emergency?" I remember thinking. "Do I have enough in the bank to buy myself a hotel if needed?" Obviously, this is a very dumb worry for a 5-year-old, but I was convinced — in the same way kids are convinced that quicksand, stop, drop and roll and the Bermuda Triangle are major life problems — that I needed to have an emergency fund.

Then one day, my 7-year-old brother asked me what on earth I was planning to do with the increasingly large stack of money in my piggy bank. When I told him it wasn't for anything specific, he insisted, "It's gotta be for something! What do you want?!" Admitting I was saving for some nebulous anxiety was obviously not the right answer, and I'd never thought about using money for something I wanted before, so I paused and whimsically responded with all the fervor of a child whose parents took her to Florida once a year on vacation to see family, "I'm saving to swim with dolphins!"

After that, the story caught fire. My brother told my parents, my parents became convinced this was my lifelong dream, and I had no choice but to double down. The idea grew on me the more I thought about it, and it was much more fun than saving for nothing.

So that's how I spent the next three years: saving all of my birthday and Christmas cash for swimming with dolphins. And I got an extremely cool childhood memory out of the experience.

It was awesome, and I'm happy I got to do it. As an adult, however, there's a little bit more nuance to the conversation about paying lots of money to interact with marine life, and in-person experiences might become a thing of the past. From SeaWorld's infamous backlash after the Black Fish documentary to changing conservation laws, bans on marine entertainment in various countries, and ongoing activist movements, there are a few reasons swimming with actual aquatic life might give some consumers pause, and some entertainers are looking for a newer and more sustainable business model.

As Reuters explains, this technology opens the doors for people to swim with everything from great white sharks to dinosaur-era sea creatures that have been extinct for millions of years, and I'm sure we'll see upgrades for on-land Jurassic World safari experiences. These animatronics are already used for movies, and these dolphins are available in some pools. Digital dolphins could also curb expenses like food, veterinary care, and giant saltwater enclosures for amusement parks.

Some consumers will definitely not buy into the experience of swimming with an animal that isn't really there, which is more than a fair critique. But for tech enthusiasts, this could be a cooler opportunity than swimming with an actual live animal; and for people already put-off by controversies in current shows, this program provides a cruelty-free alternative.

While an industry takeover by digital marine life might still be far away, these animatronic dolphins invite us to envision a future where artificial intelligence technology reinvents aquatic entertainment, and where enthusiastic kids like me see their dreams come true in different, new and fascinating ways. 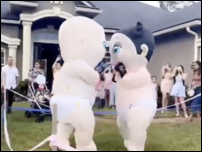 Have You Seen This? More proof that gender reveal parties have gone too far

When is enough enough? If you want me to vote for you politicians, do away with gender reveal parties.
×