Have You Seen This? Pod of teenage killer whales having a party

COLD WATER — I think nature is absolutely amazing, but I’ve never really seen anything incredible happen in front of my eyes. I once saw a bird steal a guy’s sandwich and witnessed a squirrel attack my son, but that’s about it.

I’ve never seen anything majestic or awe-inspiring. I’ve never seen a pack of wolves call out to the night, a bald eagle swoop down and pick lunch up out of a lake, or an entire pod of orcas continually jump out of the water just for kicks.

This video was captured in Cardova, Alaska, when a boat was headed out to fishing grounds. A pod of killer whales starts breaching the water and just don’t stop.

"I stood on the back deck and filmed them breaching over and over again," the YouTube description reads. "I have never seen this in twenty years of commercial fishing. The Orca filmed are all teenagers. If you look closely you can see the leader of the pod in the distance as he breaches. He is huge."

He is huge. And the fact that these are teenagers is no surprise. You’re telling me you didn’t do weird and random stuff as a teen to try and get the attention of someone in a passing boat or car? Didn’t think so.

Well, nature is beautiful and I hope to one day see something like this with my own eyes. Until then, I’ll just have to settle for that rogue squirrel bull-rushing my son on the sidewalk. It was actually pretty great.

Yesterday's Have You Seen It? 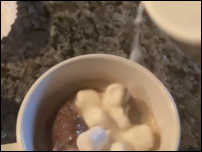 The most fascinating way to make hot chocolate

About the Author: John Clyde

John has grown up around movies and annoys friends and family with his movie facts and knowledge. He also has a passion for sports and pretty much anything awesome, and it just so happens, that these are the three things he writes about. Contact him on Twitter at @johnnypclyde.