Have You Seen This? Moose defies physics and runs on water

THE MAGIC RIVER — For those of you who have not seen this video before, prepare yourself because your brain's about to melt a little.

Remember in those old cartoons when a character would run off a cliff but not fall? Then the character would sheepishly look at the camera and say, "I haven't learned about gravity yet." Well, it looks like this moose hasn't yet learned how water works. That's because this huge animal is running at full speed across a river and appears to be running on top of the water.

Yeah, it's kind of trippy.

As if a charging moose wasn't terrifying enough, now we need to worry about magic moose who can also run on water and catch us in our boats. Not cool, mystical nature. Not cool at all.

The first thing that's going to come up in the comment boards is the classic, "This is fake," comment. What's great is even though I've called it out, we'll still get the comment then the subsequent comment of, "Didn't you read the article?" Anyway, I don't think it's fake. I'll explain why.

Logically, I'd say it wasn't fake for a few reasons. The video doesn't glitch and if it is a hoax, it's an incredibly well-done video that someone sunk a lot of time and possibly money into. In fact, if it is fake, the duper should send this video to film studios because they need to hire him or her.

Also, moose are big animals and it's possible it's so big that it just appears to be running on top of some shallow water. You can also see the splashes increase as it moves through the water indicating that it's getting deeper.

Like I mentioned, that would be the logical way to point out it's not a fake. But logic is boring. I'm going with the plain fact that magic is apparently real and the first ones to crack that code are moose. I'm really not sure what that means for humanity, but here we are. 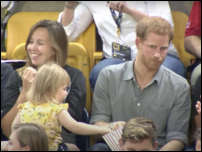 Have You Seen This? Sneaky thief blatantly steals from Prince Harry

Where is Prince Harry's security? I think some people should be losing their job over this one.
×