Have You Seen This? What happens when you yell at water bugs

THE LAKE — Doesn’t a nice getaway to a far-off lake with no neighbors in sight just sound like the bee’s knees right now?

But even if you were on that lake today, you wouldn’t be alone. It’s not just the furry and feathered critters everywhere, which are mostly trying to avoid you like you avoid them. There’s also the smaller creatures. The creatures that are harder to spot unless you’re looking for them ... or they bite you. Yep, we’re talking bugs.

The bugs in this video are not the biting kind, but they are a favorite meal of lake fish. We’re talking about the good ol’ fashioned water bug. Whether it’s water boatmen or water skaters or something else, I couldn’t say. The general "water bug" term will have to do.

The man in the clip is one of those lucky souls who have the pleasure of relaxing at a far-away lake, resting in the arms of the wilderness. Even though he’s having some nice downtime, it doesn’t mean he’s giving the same courtesy to the bugs around him.

But in this instance, we’ll forgive him for him yelling into the wilderness; after all, it's why we’re here right now.

As he yips and yells, the sound "jolts" the water bugs every time. Their movements create hundreds of rings all over the lake. It doesn’t matter how many times he does it, the bugs have a little fright every time.

It’s a visually cool phenomenon that made at least one person watch the video at least three times ... and plan a trip to a lonesome lake. 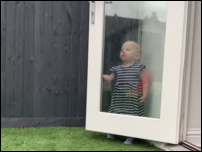 Have You Seen This? Little girl is world's worst hide-and-seek player

Seems like a pretty great idea, right? I mean, that's a little girl behind a big door. It's genius! Well, it would be genius if the door wasn't made of glass.
×
Martha Ostergar