Have You Seen This? Dramatic lightning bolt lights up Statue of Liberty

THE END TIMES — There are five months left in the year 2020 and, at this point, if fire and brimstone rain down from the heavens, I won’t be surprised. Is it really a month of 2020 if existential crises don’t pop up like a game of whack-a-mole on expert mode? I think not.

There's been the plagues, earthquakes and even a scare with giant locusts. The curse in the proverb “may you live in interesting times” has become woefully clear. This dramatic video of a lightning bolt menacing the Statue of Liberty feels symbolic of the whole year. Take a look.

As severe storms thundered through New York City last week, America’s patron green-stained statue of freedom and acceptance is a constant target. The lightning in this video only seems to strike Lady Liberty (it's in the distance behind her, according to ABC News), but apparently, the copper statue is hit by lightning an estimated 600 times a year, so this onslaught is nothing new. That doesn't make it feel less legendary.

The lightning in this video lingers and re-ignites like a deity angry at its people; and if you told me this video came from the opening montage of an apocalyptic movie, I’d believe you and say the filmmakers were heavy-handed on their symbolism. “Lay off, Jeff from the SFX department, the real world is not so poetic!” I might’ve rolled my eyes. Except, you know, Jeff was right and a 10th grader with a flair for edgy symbolic cheap shots is now apparently writing reality. 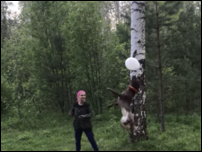 Find a moment of zen watching a dog with its balloon

Just something a little light and delightful for your news feed.

Correction: This story initially said the video shows the Statue of Liberty being repeatedly struck by lightning; it has been corrected to say that the lightning strikes in the distance behind the statue.