Have You Seen This? Father-daughter duo perfectly reenact ‘Day-O’ from ‘Beetlejuice’

THE DINING ROOM — As isolations and quarantines continue, people are getting more creative and elaborate with the videos they create.

It seems that the longer people limit their social interactions, the less spontaneous, and the more rigorously planned and rehearsed, the videos become.

For example, the father-daughter duo featured in this video hearkens all the way back to 1988 to recreate a shot-for-shot scene from director Tim Burton’s cult favorite, "Beetlejuice."

To refresh your memories, the music of Harry Belafonte plays a key role in the soundtrack for the film, which coincides with some memorable scenes.

The setting for this particular video clip is at the dinner table with six of the characters whose bodies get taken over by ghosts. (You’ll probably recognize the actors that play Principal Ed Rooney from "Ferris Bueller's Day Off" and the mom from "Home Alone.")

We’re not talking "The Exorcist" here, we’re talking about what two tenderhearted ghosts would do to try and scare people out of their house, which is basically results in karaoke night. More specifically, it makes the characters at the table sing and dance to Belafonte’s "The Banana Boat Song," more commonly known as "Day-O."

The father and daughter play all six parts to a tee in their own dining room. From the recreated costumes to the dedication of acting and lip synching, the reenactment is nearly perfect, which makes it both beautiful and hilarious.

Even if Tim Burton or "Beetlejuice" aren’t your thing, this video is still a pleasure to watch. 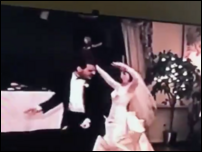 The creator of "Everybody Loves Raymond" and his wife are not ashamed of their goofy moves.
×
Martha Ostergar