Have You Seen This? Police officers perform 'Baby Shark' to entertain kids in lockdown

THE STREETS — When this video was sent to me I figured it was a joke.

The tweet said the video came from Andorra, and I was like, "Pfft. That place doesn't exist. The Death Star destroyed it a long time ago." Then I realized THAT was Alderaan and not Andorra.

Of course, that had to mean this was a place in Middle-earth. But I was wrong there, too.

Finally, I realized where I recognized the name: it's a fictional country where the Two Rivers and Rand al'Thor can be found (let's see how many of you out there are as nerdy as I am). But, it looks like that was Andor and I was wrong once again.

After doing some research, I found that Andorra is actually a small principality bordered by Spain and France. Like most of the rest of the world, the microstate is in lockdown and people are in their homes doing what they can to beat this ugly virus.

While kids may be at home going stir crazy, the police force in Andorra thought they'd do something to give these kids a little pick-me-up.

These officers turned on their patrol lights, got out of their cars and danced and sang to "Baby Shark" for all the kids in the area. The officers really get into and go all-in on the actions, bringing some life back into the eerily empty streets.

This gesture undoubtedly brought smiles to the faces of many children, as it did to mine. It also undoubtedly got that song stuck in many a parent's head once again, despite their best efforts to repress it — much like it did mine.

So, enjoy this fun video and remember that we're all in this together. Also, curse you creators for getting that tune rattling in my brain once again. 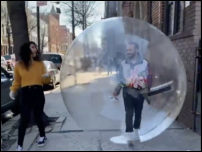 Manhattan photographer Jeremy Cohen has proven that not only is safe dating during quarantine possible, it’s positively adorable.
×