Have You Seen This? Fish with human-like face is creepy

THE LAKE — There are plenty of myths and monster movies based around beasts that live in watery depths.

From the Loch Ness Monster to "The Creature from the Black Lagoon," there is something fictional lurking in dark water to intrigue or terrify you.

Make-believe monsters are one thing, but real-life terrors of the deep are another. This article isn’t about giant squids, angler fish or goblin sharks. This article is about something that probably can’t physically harm you but might fuel your nightmares.

Meet the carp that is upsetting the entire internet.

The video was taken by a tourist visiting Kunming, the capital of Yunnan province in China. It’s thankfully short, but there’s still enough time to see a human-like face looking back at you from the water.

It looks a little more Voldermort from the Harry Potter franchise than an actual human face. However, that doesn’t stop people from feeling creeped out to the core.

There is much discussion and skepticism about whether this video is real or modified with deep fake or CGI tech. Even Snopes has no answer, providing a simple "unproven" status on their website.

But with a quick YouTube search and some basic filtering, you can easily find a 13-year old video — a time when technology wasn’t nearly as sophisticated — showing two carp with a very similar human-face look in China.

Real or not, it's still enough to freak out many people. 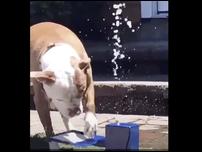 Have You Seen This? Dog just wants a drink of water

This adorable doggo named Hazel just wants to wet her whistle, but it's proving a much more difficult task than it should be.

Martha Ostergar is a writer who delights in the ridiculous that internet serves up, which means she's more than grateful that she gets to cruise the web for amazing videos to write about.