PROVO — How certain was 17-year-old Meagan Grunwald that the shots her boyfriend fired would kill a deputy who stopped to check on them in Eagle Mountain five years ago?

On Monday, five justices parsed details of the deadly traffic stop in an attempt to determine Grunwald's role in the death of Sgt. Cory Wride and the extent to which she knew he would be fatally wounded in the gunfire on Jan. 30, 2014.

Grunwald, the getaway driver who led officers on a multicounty chase as her older boyfriend, 27-year-old Angel Garcia-Juaregui, fired at them, is now asking Utah's highest court to toss her aggravated murder conviction in Wride's death.

The hearing took place at Brigham Young University's J. Reuben Clark Law School, part of an effort to allow the public to sit in on the court's proceedings.

Among the specifics the Utah Supreme Court considered Monday was the distance between the truck and police car as Grunwald pressed her foot to the brake and Garcia-Juaregui fired out the truck's back window.

If the officer had parked 100 feet away, she couldn't have known that Garcia-Juaregui would kill Wride, one Utah Supreme Court justice said Monday. But if the deputy had been approaching them as shots rang out, a deadly outcome would have been more obvious, said Justice Deno Himonas.

"She had to be reasonably certain of death" in order for her actions to fit her conviction of aggravated murder, Himonas said.

In reality, Wride was somewhere in between "the typical distance an officer pulls behind the car" in a traffic stop, said Assistant Solicitor General Chris Ballard.

Grunwald sentenced to 30 years to life in prison

Megan Grunwald was sentenced to 30 years to life in prison with a chance of parole.

Grunwald never fired a shot that day, but she was found equally liable as an accomplice to the crimes of her boyfriend, who died in a shootout with police on the freeway. She testified at trial she initially believed the glass on the police vehicle was bulletproof, but as the chase went on, began to fear for the officer.

Now 22, she argues the jury received improper instructions that led to a different outcome in her case than if the paperwork had been correct. An appeals court reversed several of her lesser convictions based on a similar requirement last year.

The Utah Supreme Court justices who weighed the case Monday will issue a written decision at a later date.

Grunwald contends that faulty instructions directed jurors to pronounce her guilty if they found she acted recklessly. But the standard for an aggravated murder conviction is actually higher, requiring she acted knowingly and with the intent to aid in her boyfriend's crime, her attorney Doug Thompson, argued Monday.

The errors in the jury instructions "fundamentally distorted the law," Thompson said.

Grunwald testified at trial that she pulled over on state Route 73 in Eagle Mountain because she and Garcia-Juaregui were arguing. Wride spotted the truck's emergency lights and stopped to see if the truck needed help, then went back to his patrol vehicle to look up a fake name Garcia-Juaregui gave him. Her boyfriend told her to put her foot on the brake, opened the back window and suddenly began to shoot, she testified.

As police pursued the couple that day, with Grunwald behind the wheel, Garcia-Juaregui shot and critically wounded Utah County sheriff's deputy Greg Sherwood in the head. The deputy survived, and was present to hear the arguments in Grunwald's appeal Monday.

Garcia-Juaregui was shot and killed by police in a shootout on the side of I-15 in Juab County.

Last year, the Utah Court of Appeals tossed Grunwald's convictions for attempted murder of Sherwood. Because her sentence for that charge was running simultaneously with that of Wride's death, the move did not shorten her prison sentence, which is estimated at a minimum of 30 years and up to life.

The appeals court in its 2018 decision said the jury was not given proper instructions and it could be argued that Grunwald was acting recklessly when driving at that point, but she didn't intend to aid in her boyfriend's actions. Grunwald was granted a new trial on charges of attempted aggravated murder, three counts of felony discharge of a firearm, and criminal mischief. 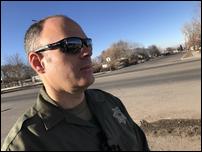 Five years after a crime spree that stretched from Utah County to Juab County and left a Utah County sheriff’s sergeant dead, another deputy who was critically wounded paid a visit to the place he was shot.

But the Court of Appeals upheld Grunwald's convictions of aggravated murder and aggravated robbery, saying "the error was harmless" on those counts.

The Utah Supreme Court agreed to hear her appeal of that part of last year's ruling. On Monday, Ballard, with the Utah Attorney General's Office, countered that the case against Grunwald was so strong that even with the proper instructions, the jury still would have found her guilty of aggravated murder.

“The evidence here showed overwhelmingly that she was a fully complicit accomplice in all of her boyfriend’s actions" by being a lookout and letting him know when there would be a lull in traffic, he said. What's more, Grunwald had "serious credibility problems" and lied about her relationship with Garcia-Juaregui, Ballard said, and about the role of a gun in a domestic violence case of his prior to the fatal traffic stop.

Utah County prosecutors say they will wait for the Utah Supreme Court's decision before determining whether to try Grunwald again.

"Being the one who submitted those jury instructions and missing that word 'reckless,' you just feel sick every time that this has to be an issue," said Tim Taylor, deputy Utah County attorney. But he said he believes the evidence still shows "she operated with intentional knowing."

Grunwald did not attend the arguments Monday. Thompson declined to say how his client is doing at the Utah State Prison, and members of her family also declined comment through her attorney.