DRAPER — Draper firefighter Patrick Cullen was in a fire engine by himself in California while working the Mendocino Complex Fire about midnight one night, when something unexpected approached.

"I kind of get a sense of something coming down the road, and all I see is two big eyes. I thought, 'Oh this will be fun, me and a mountain lion,'" he recalled.

But rather than a mountain lion, a 2-year-old German Shepherd came out of the darkness toward him, something that caught Cullen off guard since the area his crew was working had been evacuated for days, and the nearest city was an hour away.

"I could tell he was super tired and he had clearly been out there a long time," Cullen said. "He was pretty tired and weak and thirsty. So we gave him a big drink of water and he slept under the engine for the next three hours."

Later, when the fire became too dangerous for Draper's crews, they left that area and took the dog with them. The dog was dropped off at the bottom of the mountain and Cullen thought that would be the last he would see of the dog that firefighters had named Mendo.

But on Monday, after a series of events, Cullen was able to bring Mendo to Draper to meet Cullen's fellow firefighters.

The event marked a silver lining in what will mostly be remembered as a tragic deployment.

Five members of the Draper Fire Department went to California in early August to help battle the largest wildfire in the state's history. But nearly two weeks into their deployment, Draper Battalion Chief Matt "Matty" Burchett, 42, a veteran firefighter with Draper and the Unified Fire Authority, was killed when he was hit by falling tree debris after thousands of gallons of retardant were dropped on the area where he and other firefighters were working.

But while a beloved colleague was lost, Cullen ended up giving new life to the stray dog.

"There's definitely meaning not only for me but a lot of other people, including the other firefighters that were there. People already want him to come to their station. Everyone that was there, they're excited. It definitely brings some sort of happiness to a terrible event that happened," he said.

"It's a pretty cool story," he admitted.

The Draper crew had been working the Mendocino Complex Fire north of San Francisco for about four or five days when the stray dog appeared out of nowhere.

Two days after Cullen dropped off the dog at the bottom of the mountain, another fire crew found the dog. This time, police took him to the Mendocino Animal Hospital for treatment. The dog was then sent to the Mendocino County Animal Shelter.

Although the Draper crew didn't know at that point what had happened to the dog, Cullen said they talked about adopting it.

"We talked about it and kind of joked, 'Yeah, it would be cool to take him back.' We made a few phone calls and no one had seen him. So we kind of gave up on it," he admitted.

But that didn't stop the firefighters from naming him. Cullen came up with the name Mendo, after the fire that brought them together. 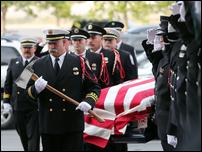 Thousands of family members, friends and firefighters from across Utah gathered at the Maverik Center on Monday to say farewell to veteran firefighter Matthew Burchett.

Cullen assumed after a few days of making calls that finding Mendo again would be impossible.

Then, out of the blue, he said he got a call.

County officials who remembered that Cullen had been making inquiries about a dog called him to say they had the one he was looking for and it was eligible for adoption as the owners could not be located.

On Sunday, two Mendocino shelter workers drove to Reno where Cullen met them to take Mendo back to Utah.

Cullen and Mendo visited Draper Fire Station 21 on Monday. While Cullen also has a Labrador that is a service dog, he said Mendo will be strictly a pet for his family.