Editor's Note: This article is part of the Utah Inventions series, which features a different inventor or invention with Utah ties on Wednesdays. Tips for future articles can be sent to ncrofts@ksl.com. OREM — Utah's WordPerfect was the dominant PC word processing application for almost a decade. It was a significant reason for the success of the IBM PC. It was also the biggest competitor to Microsoft in the word processing market and often beat Microsoft Word in popularity.

WordPerfect started as Satellite Systems Inc in 1979 with Bruce Bastian, Alan Ashton and Don Owens. Bastian was convinced to change from a master's in music to computer science by Ashton, who was a BYU computer science professor with a degree from the University of Utah. Ashton had worked with Evans & Sutherland. He had a plan for developing a word processor that included "a what you see is what you get" (WYSIWYG) screen display with easy page scrolling, inserting and text editing. They worked together on a job to develop a word processor for an Eyring Research contract for a Data General minicomputer. The deal allowed Ashton and Bastian to keep the rights to the word processor. Owens was bought out of the company in 1982.

The SSI WP program for Data General shipped in 1980. In 1982, they developed a version for the IBM PC. It had a much better feature set than the other popular text editors of the day like WordStar. It could show a version of underlining on screen. Eventually, the innovations included a keyboard template so typists did not have to move their hands from the keyboard, software printer drivers (added to MS Windows in the 90s), macros to make a key do a sequence of actions, a dictionary, proportional printing and mail merge. It could run on 128 KB!

One of the most amazing stories of computing is not out of Microsoft or Apple, or some company in San Francisco. It is about the creation of the computer graphics industry that was generated by the Utah company Evans & Sutherland.

The team decided on WordPerfect since the name was one of the only ones without trademark protection. The word processor cost $495, but IBM employees could buy it for $125 and ComputerLand (one of the biggest sellers of the software) employees could get a copy for $10. That encouraged the ComputerLand sales people to become familiar and comfortable with the product, which translated into obvious sales advantages.

Later innovations included pull down menus in WP 5.1, true WYSIWYG editing with WP 6. 0, line numbering (important for legal offices), laser printer typeset quality, and the ability to ask secretaries for feedback. For much of the 1980s, SSI did its own advertising. The company changed its name to WordPerfect Corporation in 1986. By keeping expenses low, the company didn't need any outside financing. It had no debt until Bastian and Ashton sold the company in 1994.

WordPerfect software was licensed rather than sold and granted limited rights to customers. Most PC software eventually adopted the same license. When the company had problems with too many changes in a year, it changed the software without changing the version numbers. The team encouraged the software, superseded by upgrades, to be donated to schools. Innovative marketing included giving a $25,000 prize to the person who guessed the annual sales of the company. The company also provided late night pizzas to programmers who worked long hours.

One of the reasons for the success of the company was due to a happy accident. WordPerfect had two phone numbers: a toll free sales line and a toll support line. Customers realized that they could get free customer support by calling the toll free sales line. WordPerfect decided to keep the toll free support and it resulted in strong customer loyalty, even in the face of vigorous Microsoft Word (which did not offer toll free support) competition. That incomparable customer service also was mentioned frequently in reviews. In 1986, they were averaging 8,000 toll free support calls a week. In 1988, a buggy software shipment resulted in so many calls that it broke the AT&T toll free system in Utah (angering many airlines).

The sales for 1982, during PC development, were about $1 million. In 1983, sales were $3.5 million. By 1986, it was the most popular DOS word processor. In 1987, it was the most popular PC software. It showed that a good text editor, if done right, is what everyone needs. The WordPerfect file format became the standard format for most documents, including Utah state documents.

During the 1990s, the competition with Microsoft Windows and problems with IBM OS/2 development created difficulties. Windows had incompatible key combinations with WordPerfect. When new versions had stability problems, it gave Microsoft Office and Word an almost exclusive Windows market for over a year. WordPerfect 7.0 would not work with Windows NT, which was popular with big business. 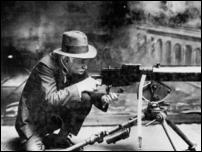 Many consider the most famous firearm in the world to be the AK47 or the M16 and their variants. But if you ask firearms experts today which firearms designer changed the world the most, John Moses Browning would be the first person mentioned.

WordPerfect went from six employees in 1980 to over 4,000 in ten years. 1991 sales of DOS WordPerfect was $533 million and the company was worth billions. For much of the 1980s, sales doubled every year. Due to competition with Microsoft, attempts to go public failed and the privately held company was sold to Novell, a nearby Utah network company, for almost a billion dollars in 1994. Eventually, it was sold to Corel.

WordPerfect's corporate "purpose was to develop, market, and support the finest software in the world," former WordPerfect employee W.E. Peterson wrote in his book "Almost Perfect." For over a decade — an eternity in the software industry — the company succeeded in that purpose. The people behind WordPerfect started at the bottom of PC word processing companies in 1982 and became No. 1 in five years through hard work, talented programming and a conservative business philosophy that left no debt.

The spirit of WordPerfect stills exists in the many companies that employees started in Utah County after WordPerfect was sold. Utah County's reputation as a software development area continues to this day. Much of the credit goes to the company founded by Ashton and Bastian.

George Chapman graduated from the University of Utah in 1974. After military service, he worked in computer software and hardware.