Have You Seen This? Flying with Superman 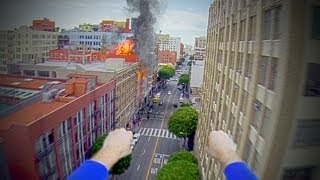 Superman With a GoPro

METROPOLIS — Let’s play a game I’m sure you’ve played before. If you could have a superpower, what would it be?

Personally, I would choose shape-shifting to nap like a cat, swim like a dolphin and be a fly on the wall. But if you chose flying as your superpower, I have a treat for you.

The video begins with Superman deciding to return a lost GoPro camera to a citizen, which, of course, he puts on his head to keep his hands free and to take us along.

He then runs and jumps out of a warehouse, and we’re “Up, up and away!” on iconic Superman-y adventures, including bursts of sonic speed, saving a damsel in distress from a burning building and stopping bullets and robbers in their tracks.

The technology is almost as clever as the video. Allow me to geek out for a moment.

The camera is mounted to the quadrocopter with a two-axis gimbal — a device that allows pivotal rotation on the camera — for smooth and stable shots from the air. A practiced quadrocopter pilot provides more in-flight stability, allowing the filmmakers to speed up the finished shot to simulate super-speed in a believable way.

The quadrocopter itself has a video transmitter so the pilot can see where it’s going. And since the range of the device is beyond eyesight, it also has GPS so the pilot can maneuver it back if the video feed is lost.

Everything else is skilled green-screen and editing movie magic. And I watched it at least three times in a row.