PROVO — A 17-year-old girl who allegedly drove her boyfriend as he shot and killed a sheriff's sergeant and later shot another deputy was charged Tuesday with the officer's death.

Meagan Dakota Grunwald, 17, of Draper, faces 12 felonies and two misdemeanors. She was charged as an adult with aggravated murder, a first-degree felony, for her alleged role in the death of Utah County Sheriff's Sgt. Cory Wride.

Some of the outstanding questions from the Jan. 30 crime spree through Utah and Juab counties included whether Grunwald was an active participant or was coerced by 27-year-old Jose Angel Garcia-Juaregui, whether the Riverton High School graduate would be charged as an adult, and what kind of relationship the two shared.

Prosecutors say Grunwald continued to follow and stay with Garcia-Juaregui even when "she had opportunities to get away or escape his control and seek the protection of officers." She also drove aggressively from officers, continued to evade police and did not render aid to Wride after he was shot, according to documents filed in 4th District Court.

Prosecutors filed charges against the teenager in adult court, based on the serious and violent nature of the crimes.

Grunwald is pregnant with Garcia-Juaregui's child, according to friends, and had methamphetamine in her system during the incident, court documents state. The two had reportedly planned on getting married when she turns 18 in August and were going to move to Mexico, friends told investigators.

The two had lived together "for several months" at her mother's Draper home, according to an arrest warrant.

Witnesses also told police that Grunwald had been buying meth for Garcia-Juaregui. Prosecutors have not said whether they believe he was high on drugs during the shooting spree. When the suspects' pickup truck was searched by police, drug paraphernalia was found inside, the charges state. 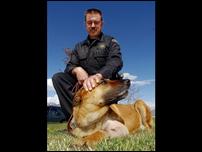 During the climatic gun battle on I-15 where the rampage came to an end and Garcia-Juaregui was shot by Juab County sheriff's deputies, Grunwald said, "Come on, baby" while looking over at him lying on the ground, and appeared to be worried about his well-being, police wrote.

After he was shot, Garcia-Juaregui asked deputies: "You not going to let me kiss my girl with my last dying breath?"

Garcia-Juaregui died from his injuries the next day. The official cause of death was determined to be blunt force trauma caused by a bullet that did not penetrate his skull but did cause swelling of the brain.

Grunwald was being held Tuesday in the Utah County Jail on $1 million bail. Her initial court hearing is scheduled for Monday.

When Wride stopped to help the two suspects near Eagle Mountain about 1 p.m. on Jan. 30, he believed they were having car trouble. He went back and forth between his patrol car and the suspects' pickup truck three times trying to verify Garcia-Juaregui's identity.

Grunwald was driving the truck that was registered to her mother. Grunwald gave the sergeant her driver's license, but Garcia-Juaregui gave him a false name.

Investigators have said his interaction with the suspects lasted about 20 minutes before Garcia-Juaregui opened the rear window of the truck and began firing shots at Wride while he was sitting in his patrol car.

"Once the shooting begins, Ms. Grunwald accelerates away from the shooting scene, leaving Sgt. Wride fatally wounded," the warrant states.

Wride's body wasn't discovered until about 45 minutes later, at 2:06 p.m., when a deputy was sent to check on him.

Sherwood spotted the pickup truck just before 3 p.m. near Santaquin. During the ensuing chase, prosecutors say Grunwald "aggressively applied the brakes" to the pickup she was driving. With Sherwood's patrol car now within close distance, Garcia-Juaregui fired two shots from the back window. The deputy was shot once in the head and critically injured.

He was emotional about it. I was emotional. It's just nice to see how much support we have. Not just from our family family, but our law enforcement family, our ward family, they've just all taken really good care of us.

Coincidentally, Sherwood was released from the hospital Tuesday and came home about the same time the charges were filed. He had been hospitalized for 19 days.

"He was emotional about it. I was emotional. It's just nice to see how much support we have," Gina Sherwood, the deputy's wife, said Tuesday. "Not just from our family family, but our law enforcement family, our ward family, they've just all taken really good care of us."

After the fleeing truck's tires were spiked and it crashed in Nephi, Garcia-Juaregui carjacked a woman who was driving back from parent-teacher conferences. Grunwald, "on her own accord, follows Mr. Garcia-Juaregui after leaving the vehicle without appearing to be coerced by him," the charges state.

At one point, Grunwald actually ran ahead of her boyfriend and flagged down the vehicle that they eventually carjacked, according to charging documents.

Later, that vehicle also had its tires spiked on I-15 south of Nephi and crossed into oncoming traffic, apparently hitting a minivan on purpose. Grunwald again tried to follow Garcia-Juaregui.

"She did not attempt to go to the Juab deputies on scene or seek safety from Mr. Garcia-Juaregui," the charges state.

The actions of four Juab County deputies who shot at Garcia-Juaregui were legally justified, the Juab County attorney determined Friday, and they have been cleared to return to work.

Multiple neighbors who know the Grunwald family but requested not to be identified gave similar accounts Tuesday of years of public family fights and other issues.

“I feel sorry for Meagan. She has not had a chance in life, really,” said one neighbor, who believes the girl was responsible for caring for her parents from an early age. “I feel bad this has happened with her, but I knew she was going with the wrong crowd. And she was not a follower, as they say. I believe she was a leader in it.”

Problems escalated when Garcia-Juaregui moved into the Draper home, and Jerry Grunwald told neighbors he didn’t like his daughter’s boyfriend. Neighbors could not confirm reports that Meagan Grunwald is pregnant, but one woman said Garcia-Juaregui gave the teenager a promise ring in November.

Another neighbor said that although police were frequently called to the home, little seemed to come from those visits.

“They’re basically a very, very troubled family that were sort of protected by the powers that be out here,” the woman said. “They never got the real help they needed.”

The most recent dispute at the home broke out in mid-January when Jerry Grunwald demanded Garcia-Juaregui move out, according to neighbors. Garcia-Juaregui had reportedly lived in the house about six months.

On Jan. 11, Jerry Grunwald slapped his daughter when she tried to stop him from getting to her boyfriend, and also slapped or pushed his wife, a Salt Lake County Jail report states. The women called 911, and when police attempted to place handcuffs on Grunwald, he lunged forward and tried to get away.

Jerry Grunwald was charged Jan. 13 with disorderly conduct, assault and interfering with an arresting officer. He pleaded guilty to a reduced charge of disorderly conduct on Feb. 6 and the remaining two charges were dismissed.

Multiple neighbors said Tori Grunwald petitioned for a restraining order against her husband, forcing him to move out following the fight. State court records indicate that she filed for divorce on Feb. 5. The filing includes a “motion for temporary order,” although records don’t specify whether it is a restraining order.

Court records indicate the parents have criminal histories, and mental health evaluations were ordered for him in 2008 and her in 2010 and 2011.