Have You Seen This? Carabiner fails and climber takes a dive

Casey Dubois was climbing fourth pitch of Warriors of the Wasteland in Squamish, British Columbia, when a carabiner failed and Dubois took a big fall. (David Snow, YouTube)

THE SCARY WALL — It has been well documented here that I am not much of an athlete. But do you know what I'm even worse at than sports? Adventure sports.

I once bought a road bike in an attempt to get into shape. I took my first ride and made it a total of 3 miles, on flat ground. I was spent and the bike has sat in my backyard now for years.

I got on a skateboard once and I think I heard the trucks actually laugh at me. I immediately fell and gave the skateboard to my brother.

I tried rock climbing at an indoor facility and was stuck frozen on the wall, paralyzed with fear. I was literally about 3 feet off the ground, clipped to a rope with a soft, padded floor underneath me.

Then, a few years ago, I went rock climbing with a group of friends. It wasn't a big climb, only 40 feet or so, and it was also incredibly easy climbing. It was a beginner's wall, undoubtedly.

One of my friends went up first and, close to the top, he missed a hold and fell. Our friend who was belaying wasn't paying attention for just a moment and missed the fall. The friend climbing tumbled about 20 feet before the guy on belay caught him. Thankfully, he wasn't hurt aside from a couple of bumps. But guess what was hurt? My psyche.

I was up next. I did it, but it was slow and shaky. I haven't been on a rock since, and this video isn't going to get me on one any sooner.

Casey Dubois was climbing fourth pitch of Warriors of the Wasteland in Squamish, British Columbia. According to the YouTube description, he was at the last part of the difficult pitch when he lost his grip and fell. He was on a rope, but the cam failed, the carabiner on the cam below unclipped, and Dubois took a fall — a big one.

I knew he was OK before I watched the video, but it didn't stop my fingers from curling into my palms as my knuckles went white.

Apparently, Dubois' helmet had some dents and dings, but he was otherwise OK. I, on the other hand, am not OK. Not at all. 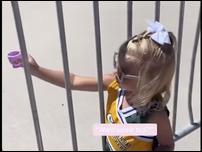 Armed with a brand new tea set, 2 ½-year-old Aria Rubens has become quite the celebrity at the Green Bay Packers training camp.
×

Have You Seen This?Outdoors & Rec