Have You Seen This? Donovan Mitchell goes off the wall at Miami Pro-Am 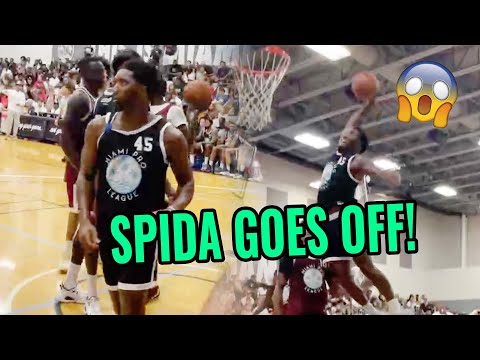 SOUTH BEACH — Donovan Mitchell has been talked about a lot off the court this summer, but this week he got back on the court to show fans why they fell in love with him in the first place.

Mitchell appeared at the Miami Pro League on July 29 and showed off some of his signature dunks that made him a human highlight reel early on with the Utah Jazz.

The dunk that went the most viral is one that may look familiar to some NBA fans, with Mitchell lobbing the ball to himself off the wall adjacent to the backboard and throwing down the hammer as the crowd erupts with an, "Ohhhhh!"

I remember he Did this our freshman year in college I still thought it was fake 🤣🤣 @spidadmitchellhttps://t.co/r15bnCHRco

Mitchell pulled out a similar move in his opening dunk at the 2018 NBA Dunk Contest as a rookie, when he brought in a second backboard to the right of the main one, lobbed the ball off the new one and finished with a windmill dunk. The performance ended up earning him Dunk Contest Champion that year.

2018 #VerizonDunk Contest: Every Made Dunk From Each Participant!

Atlanta Hawks guard Dejounte Murray recently took to social media to encourage all his NBA peers to take time out of their summers to play in Pro-Amateur events across the country, "so these kids and people who can't afford to see us be able to see us for free."

Have You Seen This?Utah JazzSports