Presley Morse, 6, lies on a dock while fishing with her mother, Jill Gilson, while they camp at Scofield State Park on Friday, Aug. 27. (Spenser Heaps, Deseret News)

SALT LAKE CITY — After a decade of steady growth and record-setting numbers, the pandemic proved to be a speed bump for Utah's tourism industry, which saw widespread decline in visitation and revenue during 2020.

The forecast is looking better for 2021, though. And while certain tourism-dependent sectors saw a financial decline during the pandemic, some areas — like recreation-based retail, the ski industry and the state parks system — appear to be on the up.

That's according to the University of Utah's Kem C. Gardner Policy Institute's "State of Utah's Travel and Tourism Industry" report, released Wednesday. The detailed analysis looks at everything from national park visitation, the ski industry, the retail side of recreation and more. Here are some key findings from 2020:

In what will come as no surprise to anyone who tried to buy a camper, bicycle or boat, recreation-related sales was one aspect of the tourism industry that shot up during 2020. Boat dealers, recreational vehicle dealers and retail sporting goods all saw year-over increases in taxable sales.

Recreational and vacation camps saw a whooping 81% increase in sales.

That rising popularity in outdoor recreation was eye-opening to report author Jennifer Leaver, senior tourism analyst at the institute.

"It makes sense that (outdoor recreation) became popular, but mountain bikes selling out and boat sales, RV sales being higher — it surprised me to the extent that those things increased," she said.

The pandemic year was an underwhelming one for Utah's national parks — across the board, Utah's mighty five had double-digit percentage declines in visitation, with Bryce Canyon seeing the largest drop at 43%.

But the rebound has been stunning, with all five of Utah's national parks seeing record visitation from Oct. 2020 though June 2021.

"It happened fairly quickly once vaccines were available. ... I anticipated that it would get close to the baseline again, but literally setting records — that was interesting," said Leaver.

How the Arches National Park staff expects to 'redistribute, not limit visitation' with new ticket plan

There's a message that Arches National Park staff members have often found themselves having to send on social media on a regular basis these days in response to the park's popularity. "The park is currently full."

The Gardner Institute attributes much of that decline to COVID-19 restrictions, which closed the parks for a period of time and dissuaded out-of-state travel.

That wasn't the case for Utah's state park system, which had a banner year and likely saw an increase of tourists due to closures at national parks, despite also being impacted by pandemic restrictions.

Even with a drop in visitation, national park tourism still sent ripples through local economies in rural Utah. According to the report, visitors spent $878 million in national park communities and supported 13,600 jobs. Those numbers are down from $1.2 billion and 18,700, respectively, in 2019.

Since 2015, visitation at national and state parks have trended differently, with state parks growing increasingly popular. Highlighted in the report is the Utah Office of Tourism's pivot from the "Mighty Five" campaign, which sought to promote the state's national parks, to the "Red Emerald" initiative, which is aimed at distributing travelers throughout the state while promoting less-visited state parks and landmarks.

"Utahns and out-of-state visitors are passionate about our state's wonders. We are encouraging more immersive travel off the beaten path to create a perpetual visitor economy," Vicki Varela, managing director of the tourism office, said in a statement.

Leaver says that rise in state park popularity could be the result of the Red Emerald campaign's success — but closures at the state's national parks early in the year, combined with an explosion in crowds later in the year, and into 2021, could also be pushing people to smaller, more remote destinations.

What could have been of the 2019-20 ski season? We'll never know after resorts closed early because of the pandemic. But it was on track to be a profitable year, and even with the closures, the season ranked second for skier spending at $1.55 billion, and fifth for skier days.

Resorts came up with some creative measures the following season to stay open, like enforcing mask mandates, social distancing measures, rental and parking reservations and changes to food service. 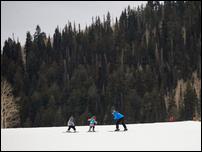 Will there be enough snow in the West to ski in 50 years? New study has bleak answers

The negative impact climate change could have on winter has been discussed at length, but an October study paints maybe the most bleak forecast to date: In 35 to 60 years, mountain regions in the American West could see little to no snow.

It's hard to forecast where this year's tumultuous ski season is headed — Utah's mountain regions saw the snowiest October in over a decade, followed by one of the driest Novembers and now what is shaping up to be a snowy December. On Wednesday, resorts in the Central Wasatch reported nearly 19 inches of snow as skiers flocked to the mountains.

Leisure and hospitality taxable sales were down in nearly every sector, from performing arts and spectator sports, to hotels. Restaurants saw the smallest decline, going from $4.9 billion in 2019 to $4.46 billion in 2020, a 9% dip.

Even with the influx of skiers and state parkgoers, hotels in Utah saw widespread declines in revenue and bookings. In 2019, the average occupancy rate for hotels was 63% — in 2020, it dropped to 46%. Statewide occupancy hit its lowest point in April, down 67% from 2019, but rebounded later in the year.

At almost 48%, Salt Lake County saw one of the worst declines in transient room tax revenue when compared to 2019, a helpful metric to gauge how much hotels are making.

However, Utah's rural counties saw some of the biggest declines in tax revenue — Emery took at 31% hit, Garfield saw a 36% decline, and San Juan had the biggest loss of any Utah county at 52%.

Leaver says the reason for the decline is twofold — national park closures sent a shockwave through rural tourism economies, especially the hospitality industry, that rippled into the summer. And the lack of international tourism, which typically plays a large role in southern Utah, left many hotels reeling.

But Leaver expects to see a rebound there as well, telling the Deseret News, "If we look at 2021, I think they will be back up to where they should be."

While hotel revenue was in decline, short-term rentals, available through popular platforms like Airbnb or VRBO, grew in popularity.

Many of these rentals popped up in rural Utah, and Juab County saw a 213% increase, Sevier County an 86% increase and Beaver an almost 78% increase.

Where are all these tourists coming from?

International travel dropped off because of the pandemic, but domestic travel still had an impact on Utah's tourism industry — in 2020, domestic nonresidents accounted for 21% of overall visitor spending.

About 11% of that travel came from California, the most of any state, followed by Nevada at 7% and Idaho at 6%. Colorado, Arizona and Texas weren't far behind.

Domestic travel made a strong recovery in 2021, though international travel is still lagging.

According to the report, experts predict a 20% increase in domestic trips and a 73% increase in international arrivals for 2021 when compared to 2020.

Leaver doesn't see the record-visitation in the wake of the pandemic as an anomaly. If anything, she thinks those trends could continue.

"I would anticipate continued visitation at national parks and state parks above 2021, even if it's just slightly above," she said, extending that forecast to the ski industry.

"I feel like people just want to travel, and they're getting stir-crazy still," she said.