Here's what the $1.2T infrastructure bill will look like in the West

A FrontRunner train travels through the Jordan Narrows, with its single rail line running next to a Union Pacific line, on the border of Riverton and Bluffdale on Thursday, Feb. 25. (Spenser Heaps, Deseret News)

SALT LAKE CITY — The House passed the highly anticipated $1.2 trillion infrastructure bill late Friday, a sweeping package that will likely impact all 50 states in some way. The legislation, which the Senate approved in August, now awaits President Joe Biden's signature.

The package, which includes $550 billion in new spending, is aimed at improving the country's roads, bridges, railways, water systems and broadband internet. In the West, the bill is being touted as a multipronged approach to tackling issues specific to the region, like drought, wildfires and public lands management.

Although it's too early to tell the exact scope of those projects, here is where some of that money is being diverted, and how it could take shape in Western states:

The bill lays out over $8 billion for water infrastructure projects across the West, which is undergoing a historic drought.

In Utah, officials are hoping that $8 billion will take shape in several ways.

In the wake of several devastating wildfires this past summer — the Dixie Fire burned an area the size of Rhode Island, dumping smoke across the Mountain West and now ranks as California's second-largest recorded fire — lawmakers earmarked billions for fire research and mitigation. 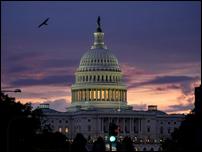 Despite it taking up scores of pages in the lengthy bill, the scope of public land management extends beyond wildfire mitigation. Here are several ways public lands in the West could be impacted:

Between a possible tunnel in Wyoming's Teton Pass, a boost to Utah's highways and what the White House says is the largest federal investment in a passenger rail system since Amtrak was created, here are some ways the package could help the West's travel infrastructure:

According to the White House, there are more than 30 million Americans living in areas with no broadband infrastructure. The bill's $65 billion investment seeks to change that.

Over $42 billion in grants will be available to states for broadband projects, and an additional $14 billion is being allocated to provide a $30 monthly voucher to help low-income Americans pay for internet service.