A home for sale sign is pictured in the Salt Lake Valley on July 16. It appears Utah’s housing market may be cooling off ever so slightly, according to the latest home sale figures. (Scott G Winterton, Deseret News)

SALT LAKE CITY — It appears Utah's housing market may be slowing ever so slightly, according to the latest Salt Lake County home sale figures.

But that doesn't mean the market's not still red hot — only that 2020, the year the pandemic threw the national housing market into upheaval and spurred record-breaking home sales, especially in the West, is outpacing a still simmering 2021.

Even though home sales in Utah's most populous county, Salt Lake County, appear to be slowing, 2021 is still projected to be the No. 2 best year for home sales, according to the Salt Lake Board of Realtors.

This summer's slowdown is likely due to fewer listings and higher prices.

"Competition to purchase a home remains fierce for buyers," Matt Ulrich, president of the Salt Lake Board of Realtors, said in a prepared statement issued Thursday.

"While sales have recently slowed, multiple offers are commonplace on most properties. Home prices continue to rise."

Home sales in Salt Lake County fell 17% in August compared to sales in August 2020, according to UtahRealEstate.com. It marked the third consecutive month of falling sales year over year. Sales in July were down 25%, while in June they fell 8%.

Still, despite this summer's slowdown, sales from January through August this year are only 3% lower than the same eight-month period in 2020, according to the Salt Lake Board of Realtors.

More homes sold in 2020 in Salt Lake County than any other previous year on record, the Salt Lake Board of Realtors said, putting 2021 on track to be the second-highest sales year ever. 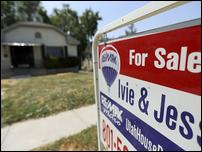 Is the West's housing market overpriced? These Utah, Idaho cities rank as nation's most 'overvalued'

Three Utah cities are in the top 10 "most overvalued" housing markets in the entire country: Ogden, Provo and Salt Lake City.

Recent research out of Florida put three Utah cities — Ogden, Provo and Salt Lake City — close behind Boise as among the top 10 cities in the nation with "overvalued" housing prices.

The market is still a fast-paced environment for buyers to navigate.

A typical Salt Lake County home sold in just six days in August of this year, down from nine days in August 2020. And sellers continue to rake in millions. Total sales volume in August increased to $870 million, up 4% from $833 million in August of 2020, according to the Salt Lake Board of Realtors.