Is the West's housing market overpriced? These Utah, Idaho cities rank as nation's most 'overvalued'

A "for sale" sign is pictured in Salt Lake City on July 15. A new study says three Utah cities and an Idaho city are in the top 10 "most overvalued" housing markets in the entire country. (Kristin Murphy, Deseret News)

Another city in the West — Boise — is ranked No. 1 in the nation for its overpriced houses.

That's according to research that was recently released out of Florida Atlantic University and Florida International University.

The Utah and Idaho cities rose up the ranks among cities in other states like Texas, Michigan, Washington, Arizona, Nevada and California with housing markets that researchers consider "most overpriced" in the United States, the study published Aug. 26 found.

The researchers used open-source data from Zillow or other providers to score the top 100 overvalued or undervalued metro areas in the nation, ranking the cities by a percent premium homebuyers are paying in today's market based on a history of past pricing.

Here's how the top 10 rankings landed, according to the research:

The typical value of homes in Boise was over $523,300 as of the end of August, up more than 46% over the past year, according to Zillow.

Buyers in the most overvalued markets are paying near peak prices and risk getting stuck in their investment for some time before they can realize returns, said Ken H. Johnson, a real estate economist and associate dean at Florida Atlantic University's College of Business, one of the researchers who conducted the study.

"In the top 10 markets, potential buyers might want to consider renting and reinvesting money that they otherwise would have put into homeownership," Johnson said in a Florida Atlantic University research article. "Renting and reinvesting has been shown to often outperform ownership in terms of wealth creation."

But rent in Utah is far from cheap too. A report released this week found the average rent in five major Utah counties shot up a stunning 45% in just over the past year and a half. 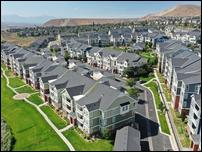 Report: Rent prices in these Utah counties have skyrocketed — including one with a 66% jump

The average rental price in five major Utah counties has shot up a stunning 45% in just over a year and a half.

The research out of Florida ranking the three Utah cities at the top of the nation for overpriced housing markets caught the eye of state budget officials, who briefly discussed it during a presentation on Utah's economic outlook in a legislative committee meeting Tuesday.

Maddy Oritt, senior economist in the Utah Legislature's fiscal analyst office, pointed to the Ogden, Provo and Salt Lake City rankings in her presentation to the Executive Appropriations Committee, calling Utah's housing market "red hot," with home prices sharply shooting up over the past year even though they've been steadily climbing for about a decade.

"This current period of price escalation is the most prolonged in Utah history," Orrit said. "It started in 2012, and we're still going strong nine years later. As of 2014, which is about when prices return to pre-recession levels, the median home price has increased between 55% and 70% across the state."

"So it's just increasing even more than ever and not really showing signs of slowing down," she said.

For years now, Utah, which has been the fastest-growing state in the country over the past 10 years, has continued to grapple with a housing shortage that's fueling an affordable housing crisis. In the past year in particular, Utah and other states like Idaho have seen "insane" housing prices thanks in part to the COVID-19 pandemic, which threw the national housing market into upheaval.

Utah lawmakers earlier this year set aside about $50 million for affordable housing and homelessness initiatives, which they said would be multiplied to $730 million through community donations and investments — but it will likely take years for those investments to turn into units.