How can Utahns save water in drought? Governor wants to buy back your lawn

"We have seen significant water reductions in every water district across the state," Cox said, lauding the efforts of the public and water managers.

Against the backdrop of the Conservation Garden at Jordan Valley Water Conservancy District in West Jordan, Cox called for more action to reduce water consumption.

With upward of 70% of water used for outdoor landscaping, Cox said it is past time for the state and cities to aggressively embrace water-saving strategies.

While noting that turf buyback programs like Jordan Valleys' Flip Your Strip are local-centric, Cox said he wants Utah to be the first state in the nation to implement its own.

In Jordan Valley's program, participation in the Flip Your Strip program is up 160% this year.

The governor also said all secondary water systems should be metered. In cases where metering is already happening, the savings has been as much as 30%.

He emphasized, too, that land use planning needs to be integrated with water use planning, but more often than not, that coordination does not take place at the level it should.

Utah governor calls this attitude about the drought 'ignorant'

As Utah deals with one of the worst droughts in its history, Gov. Spencer Cox wants to set the record straight about who is responsible for the water shortage.

With Utah being the second driest state in the nation and in the grip of a protracted drought, Cox said all new development should be accompanied by waterwise landscaping and cites should shelve ordinances that require curbside turf or other mandates.

Across the state there are multiple cities that have enacted various restrictions or taken other measures to cope with the effects of this drought.

Most water providers have moved to a twice-a-week-only irrigation regiment and some are shutting down the season early, such as Davis and Weber Counties Canal Co., which will cease providing water in September.

In information provided at the press conference, officials pointed to water savings in Layton, where residents and businesses have used 94.9 million fewer gallons of water this year compared to last year.

In Sandy, the community has saved more than 234 million gallons of water — the equivalent of 359 Olympic-sized swimming pools.

As Pineview supplies start to falter, North Ogden passed an ordinance relaxing some rules around use of culinary, or treated water, on shrubs, trees, flowers or for livestock.

City Manager Jon Call said normally the use of any culinary water outside is strictly prohibited, but a shortened irrigation season is requiring flexibility to be built into the system.

Any culinary water use on lawns remains against city ordinance, and residents who abuse that rule could be subject to a fine as high as $250. 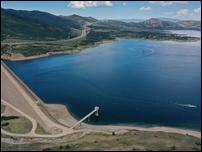 Utah crops are suffering or fields are fallow, cattle are sold off as ranchers face a loss of rangeland, and water managers are dipping into emergency supplies as the tendrils of this extreme drought refuse to loosen their grip on the West.

"I have been really impressed driving around the city to see how many lawns are following the restrictions."

While some cities are hitting conservation targets — Lehi reported its residents had dropped their year-over-year water use by 213 acre feet — others are falling short.

Riverdale in Weber County recently reported its aquifer had dropped 17 feet since May 1 and water conservation goals fell way short of what authorities had hoped. Even though its water is filtered and recycled, the city said it is shutting down its splash pad on Aug. 2 due to some water loss.

Some towns are already out of water, such as Echo in Summit County that has been forced to truck in drinking water from Henefer. In response to the drought, Oakley put a moratorium on any new development and Herriman pressed pause on its landscaping requirements on new development until Sept. 15.

The city said new landscaping, especially lawns, require a lot of water to germinate, and it would be best to wait to plant it in a cooler time of the year.

Salt Lake City Mayor Erin Mendenhall issued a drought advisory in late March, looking ahead to what was predicted to be an unprecedented drought year.

Water-saving strategies are showing some success in unique ways.

The Weber County Sports Complex launched an initiative to do fewer "cuts" at its ice rink and by doing so, anticipates saving more than a million gallons over the year.

Residents can learn more about rebates and water wise landscaping at UtahWaterSavers.com