Lumber prices have quadrupled. Here's who it's hurting

SALT LAKE CITY — Georgian-era economist Adam Smith's "invisible hand" theory of a free market that self-balances thanks to the supply and demand dynamic has been delivering a hard slap to global homebuyers and renovators, driving a nearly 400% increase in lumber prices in just the past year.

And the sting isn't likely to fade any time soon.

A lumber industry that saw contraction and consolidation following the 2008 housing crisis and subsequent Great Recession was further hamstrung by forced shutdowns and workforce reductions under rules aiming to curb the rise of COVID-19. Now, even as lumber production ramps back up, a frenzy of home buying and renovation activity in Utah and around the country, driven by consumers throwing off the shackles of pandemic-induced home isolation, has skewed the market and led to price increases that, as of April, were 374% higher than the same time last year.

Last week, Wells Fargo economists issued a report detailing a perfect storm of circumstances that's led to the current historically high costs for forest industry products that, unbeknownst to most, were already in short supply before the pandemic hit.

"Housing demand proved surprisingly resilient during the pandemic and increased abruptly during the second half of last year, catching many building products producers by surprise," the economists wrote. "The pandemic spurred demand for more useful living space to accommodate working from home and remote learning. This abrupt shift in demand fueled a surge in renovation and repair spending and set off a wave of home buying during the second half of last year."

Consumers ready to expand and upgrade their living spaces have also been leaving pricey coastal cities in droves, looking inland toward markets that, by comparison, remain in the realm of affordability even for modest incomes. And that interest is draining inventories of existing homes and driving demand for more new construction.

"The return of the affordability migration also sent more people to the suburbs and rapidly growing metro areas in the South and Mountain West, resulting in a surge in home buying," the report reads. "With little for-sale inventory, prospective buyers are increasingly looking to the new home market, and builders are struggling to keep pace."

The National Association of Home Builders has been monitoring lumber's meteoric rise and reporting out regularly on impacts. Last August, price increases added $16,000 to the cost of an average new home. In February, that had risen to $24,000. Last month it was $36,000, and in a Deseret News interview this week, the association's director of tax and trade policy analysis, David Logan, said lumber price increases were continuing to add costs to new construction and renovation projects.

Logan said impacts of lumber price escalations are global with roots going back to the start of the COVID-19 outbreak.

"As with most things over the past year, the high prices can be traced back to the start of the pandemic," Logan said. "Lumber mills, like other businesses, closed at the onset and they reopened but did not ramp up production enough to keep pace with home construction levels.

Lumber mills, like other businesses, closed at the onset (of the pandemic) and they reopened but did not ramp up production enough to keep pace with home construction levels.

"And, high demand and severely constrained supply combined to create an imbalance that has persisted until now and looks to persist until at least late 2021."

Logan said the most likely factor to push prices back toward pre-pandemic levels would come from rising output from the forest products industry, and also noted the buyer side of the equation could be changed dramatically if the overall rising costs of goods leads to changes in financial markets.

"One of the biggest worries for the housing sector is the possibility of rising inflation, which could very well result in increased interest rates. which would be pretty devastating," Logan said.

Logan said consumers who are still in the planning stages of having a new home built or doing major renovations are being pushed to find ways to economize in the face of unprecedented cost increases. Those strategies include downsizing overall square footage of projects, opting for more affordable finish materials and scaling back spending on appliances. And some consumers and builders, Logan said, are simply delaying projects until material prices come back down.

Dejan Eskic, senior research fellow at the University of Utah's Kem C. Gardner Policy Institute, said the ultra-high demand for housing was exacerbated by pandemic conditions, but there's data suggesting the U.S. was already on track for increased demand based on the population makeup.

"We're in this great demographic cycle for homebuyers," Eskic said. "If you look at it nationally, 32 million Americans are between 27 and 33 years old, the prime age group for home buying. COVID-19 didn't create new demand because it was there already.

"What COVID did is accelerate the trends."

Eskic noted that international trade policy, and the relative value of the U.S. dollar on world markets, are other factors having impacts on the roiled forest products industry. Where once a majority of the U.S. lumber demand was met by domestic production, now imports have taken over the lion's share of that supply chain with Canada's province of British Columbia, on its own, accounting for about 30% of the lumber consumed in the U.S. 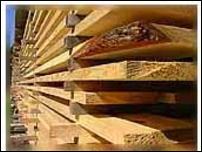 Demand isn't the only thing driving up the cost of a new home. Out-of-control lumber prices have added tens of thousands of dollars to the price of construction, according to a national analysis.

Consumers appear to be bearing the biggest burden of the lumber price increases, but some builders and contractors who signed contracts with price guarantees in the midst of the rising costs are facing reduced profits or even losses on those projects.

The National Association of Home Builders has asked President Joe Biden, as well as leaders at the U.S. Department of Commerce, U.S. Department of Agriculture and the U.S. Forest Service to look into the issues surrounding the lumber supply chain, including ways it could be enhanced.

"It is easy to see that current prices represent an intolerable and frequently insurmountable financial burden to home builders and contractors," a March 12 letter from the association states, adding that home builders and construction firms that have signed contracts at previous prices are forced to absorb the "crippling increases."

"There is a significant risk that many of these firms will be forced out of business."