Why are wrong-way crashes up 30% in Utah and even higher across the country?

SALT LAKE CITY — On a recent conference call with the heads of other state highway patrol troopers, Utah Highway Patrol Lt. Nick Street said the conversation turned to a topic that had been on his mind.

While the head of the Utah Highway Patrol was talking about an increase in wrong-way crashes locally — including fatal crashes — other administration heads said they are seeing the same thing in their states, Street said.

The group realized that an increase in wrong-way crashes is a problem nationwide.

"There were 2,008 deaths from wrong-way driving crashes on divided highways between 2015 and 2018, an average of approximately 500 deaths a year," according to statistics from the AAA Foundation for Traffic Safety,

Likewise, fatal wrong-way crashes are also up in Utah.

Nationally, the AAA cited impairment as being the biggest factor in wrong-way crashes. Other causes for wrong-way drivers include older drivers becoming disoriented and solo drivers making wrong turns, according to the study.

Street estimates more than 90% of wrong-way crashes in Utah were caused by an impaired driver.

Some of those crashes include:

Street said one fatal crash on the Legacy Highway was caused by a driver who apparently thought she was on a two-lane highway when she made a U-turn and began driving into oncoming traffic. 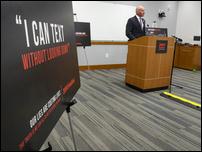 Utah public safety officials on Monday launched a new advertising campaign aimed to reduce the number of traffic-related deaths following an uptick in traffic deaths despite a reduction in road use in 2020.

One of the recommendations being made by AAA and the National Transportation Safety Board in light of the report is the installation of more visible signs and signals so drivers won't become confused on the road. For the issue of elderly drivers, the groups also recommend that states "change their laws to help identify medically at-risk drivers, both physically and cognitively, to keep everyone safely driving as long as possible."

"The data also shows that drivers over age 70 are more at risk of wrong-way driving than their younger counterparts," the report states.

Data shows drivers age 75-79 spent less time on the road and drove fewer miles than younger age groups, "and yet, this same age group is overrepresented in wrong-way crashes."

The groups also encourage states to double down on efforts to curb impaired driving.