Have You Seen This? Sheep is confused by new type of 'ground' 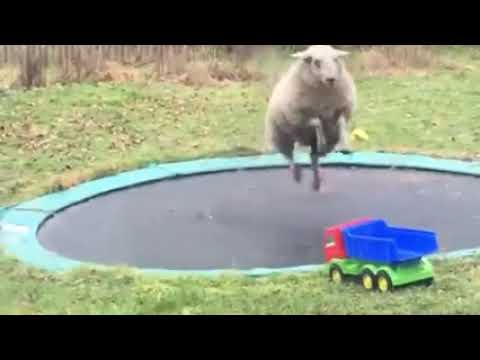 Sheep Discovers How To Use A Trampoline

THE BACKYARD — If patient enough, something interesting will happen in your backyard.

Your yard could become a territorial turf battle between birds and squirrels, you could witness a mega windstorm that blows away that old swing set you keep meaning to get rid of, or you could spy some sort of unexpected animal (crossing my fingers for you that it's not a cougar or a bear).

But arguably the best odd backyard occurrence is when animals find a trampoline.

Plenty of videos exist where an owner gets their dog on a tramp, who then curiously tests their jumping prowess. There are even videos of a fox or two trying to get the lay of the "land" on a trampoline. But a category that seems sorely missing on the internet is barnyard animals on trampolines.

This featured video rectifies that with the wonderfulness that is a sheep on a trampoline.

Just like every other animal on a tramp, the sheep seems partly confused and partly delighted by its discovery. Between jumping with a little more oomph (including adorable tail flops), it paws the "earth" to try and figure out what magic lies beneath its feet.

But the sheep isn't the only character in the scene. A little girl inside the home also notices the jumping sheep, and her joy becomes ours.

During this holiday season, as we are guided by our state government to stay home and not mix households, my fondest wish is that you all get to experience a jumping sheep (or equivalent) in your backyards to bring you joy.

Minivans are made to carry kids and cows

Over the years, the minivan has taken on many different jobs.
×
Martha Ostergar