The event was originally going to be held in Liberty Park on Saturday at 9 a.m. with hopes of “raising awareness for human trafficking and child exploitation,” the Utah Attorney General’s Office wrote on Twitter.

However, several hours after initially promoting the event, several questions were raised about the event’s connections to "Save the Children" rallies against human trafficking scheduled across the nation on Saturday that reports have tied to the online conspiracy theory community QAnon.

The A.G.’s office later explained on Twitter the event was “separate and NOT related to the Save the Children group” and that while the two have similar events taking place, “we and this event are not part of that movement.”

By 8:20 p.m., Reyes had issued a statement on Twitter postponing the event “due to questions about association with other human trafficking events being held the same day.”

The original event was a partnership between the attorney general’s office, 3Strands Global Foundation, members of Utah’s Trafficking in Persons Task Force, government officials, other nonprofits, and concerned citizens, Reyes wrote in the statement.

Hundreds of “Save the Children” events, which NBC News reported have largely been planned on social media by QAnon supporters, are slated to take place Saturday across the country. 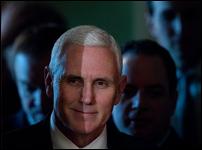 Vice President Mike Pence is dismissing QAnon as a “conspiracy theory,” drawing a line of distinction between himself and President Donald Trump.

QAnon, which has gained traction in recent months on various social media sites, was mentioned specifically in an FBI bulletin last year that labeled "conspiracy theory-driven domestic extremists" as a domestic terrorism threat, according to a 2019 Yahoo News report.

The group is thought to be responsible for spreading a debunked conspiracy theory alleging internet commerce company Wayfair had participated in human trafficking.

On July 30, Utahns marched for "World Day Against Trafficking in Persons,” an event organized by the Attorney General's office, along with Utah nonprofit Operation Underground Railroad.

“However, upon receiving further information, including careful investigation of citizen input, event organizers determined that there were too many questions about one of the partners, and rescheduling this event would prevent public confusion with unaccounted agendas and political causes,” Reyes continued.

A new date for the event hadn’t been announced as of Friday evening.