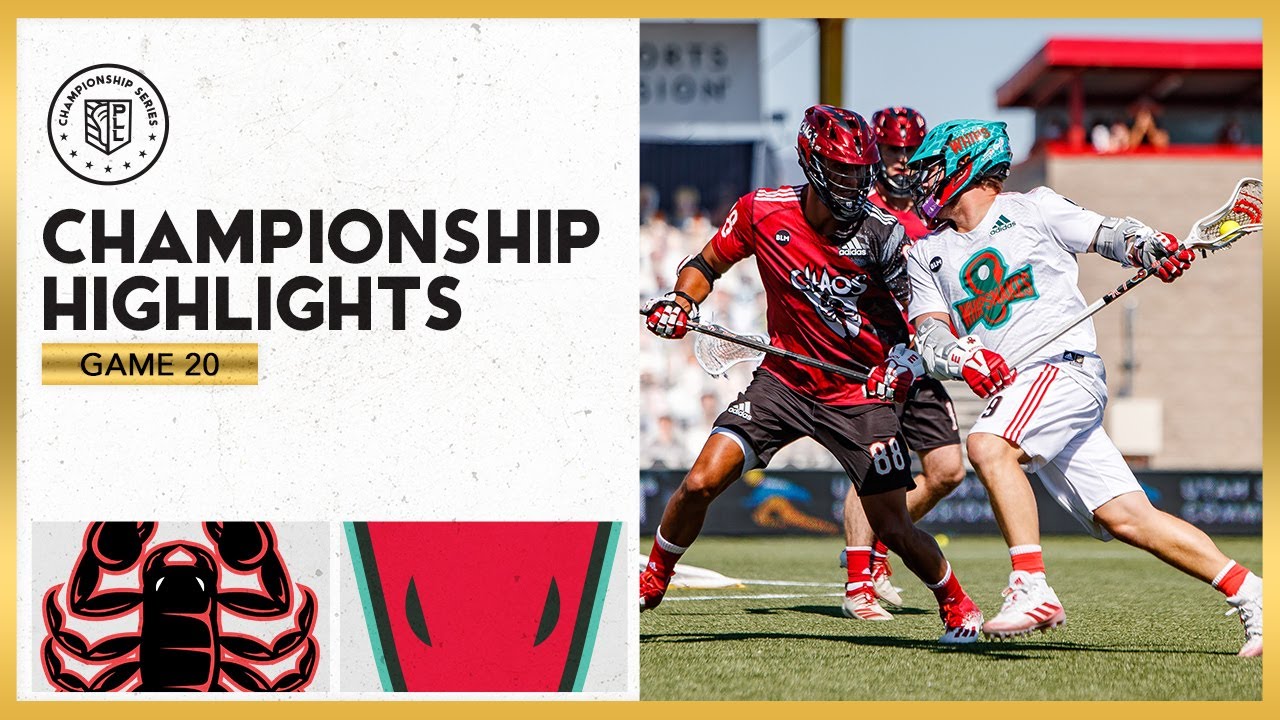 HERRIMAN — With the backdrop of the Oquirrh Mountains on one side, the Wasatch Front on the other, and an empty stadium in between, the Premier Lacrosse League named a champion Sunday morning.

For the second-straight year, a familiar group raised the trophy high in the air.

Zed Williams had six goals, and goalkeeper Kyle Bernlohr had a 73% save percentage to help the Whipsnakes pull away from the Chaos, 12-6 for their second-straight championship in as many years of the league Sunday at Zions Bank Stadium.

“I knew the whole game our defense would keep us in it. Kyle stood on his head,” an emotional Williams told NBC after being named MVP of the Championship Series with a league-high 20 goals. “I knew I had to make something happen as we got into the fourth quarter. But this one is for my dad.”

Williams lost his father in 2017, with just enough time to go through the traditional 10-day mourning period required by his Iroquois bloodline before playing in an NCAA lacrosse game for Virginia.

Matt Rambo added a goal and three assists as the Whipsnakes used a 10-0 run to flip a 6-2 deficit into a 12-6 advantage in the fourth to cruise to their second-straight PLL title.

Dhane Smith capped a 6-0 run midway through the third quarter that turned a 2-0 deficit into a 6-2 lead for the Chaos after taking a 4-2 halftime lead.

“I think we were playing a little too tight,” said Rambo, whose team scored nine goals in the fourth quarter. “We just played loose — and you know the guy, Zed. He stepped up big.”

Williams scored back-to-back goals to cap a 4-0 run in just over seven minutes, tying the game at 6-6 with 9:41 remaining.

Just 22 seconds later, Jay Carlson gave the Whips their first lead since the first quarter with a pump-fake shot to go up 7-6. Williams added two more to go up 9-6, lending credence to his “Zeddy Ballgame” or “Zedzilla” nicknames.

No matter the nickname, Williams came up big. So, too, did his team.

“I’ll remember all 21 of those guys and our three coaches,” said Whipsnakes’ Joe Nardella, who had an assist in the final. “That’s what I’ll remember the most: how much time we got to spend together.

“Championships come and go, but winning two is a legacy, and the Whipsnakes’ dynasty starts today.”

The game wrapped up a three-week quarantined, fanless tournament that represented the second season of the Premier Lacrosse League. For the better part of month, players, coaches and staff members were separated from the world, eager to play a tournament and a season amid a global pandemic.

All they had was each other. And for the Whipsnakes, it was enough.

“This is like family,” Whipsnakes coach Jim Stagnitta said. “If you’re not a close-knit group and don’t truly care about each other, it can be a long time together in tight quarters. But I’d be remiss if I don’t thank the PLL and the training staff, the support staff.

“It’s been amazing. I’m not sure any of us thought we would get to this point. We thank all of you for making this a phenomenal experience for us.”

It also capped a busy season by the Utah Sports Commission, which helped usher in the return of sport to the Wasatch Front that also include professional Supercross at Rice-Eccles Stadium and the Utah Championship on the Korn Ferry Tour in Farmington.

Each event was guided by a form of “bubble,” not unlike the one used by the NBA and MLS in Florida to help those sports restart. Athletes checked into “PLL island” prior to the start of the tournament, were required to test multiple times for COVID-19, and were in complete lockdown outside of games, practice and heavily-monitored meal time.

It’s worked, though. In addition to the PLL, the NWSL also held a fully-quarantined league tournament in Utah. The Houston Dash beat the Chicago Red Stars in the final of the NWSL Challenge Cup at Rio Tinto Stadium last month. Both teams finished their tournaments without any on-site positive tests for COVID-19, though the nine-team NWSL had a team withdraw prior to the tournament because of multiple diagnoses.

“We’re grateful,” PLL co-founder Paul Rabil said. “It starts at the top with our medical team who installed a great protocol.

“We’re grateful to have finished this event without COVID threats ... We’re here to play this game; it’s a creator’s game. And what we’ve been able to do amidst this pandemic and amidst a conversation around social justice is huge for us.”