Have You Seen This? Stop-motion video is the best use of time during pandemic

THE DRIVEWAY — Thanks to the coronavirus pandemic, we've now been living under new guidelines and sticking close to home for months.

I started working from home in March, and there is no plan to head back to the office any time soon. What have I done with all this time at home? I've watched more documentary series on Netflix than I'd like to admit, and even watched all four seasons of a CW show called "Hart of Dixie." So, suffice it to say I've wasted my extra time.

I already felt bad about my slothfulness, but now that self-loathing has been ratcheted up to an 11 with this video originally posted by Black Culture Entertainment.

Dopest video I’ve ever seen. Ever.

These guys decided to take their extra time and make one of the most clever, well-executed and downright cool stop-motion videos I've ever seen. The video is a silhouette playing basketball and shooting a jump shot, but it's so much more than that. The way they made the video was by painstakingly using water to outline all of the shapes and then editing all of the images together.

To start, the video you see their method. As the rest of the video plays out, your mind is slowly but surely melted as you realize the time, effort and patience that went into this.

Good for you guys in making such awesome use of self-isolation time. You've inspired me. You've motivated me. I'm going to start making the most of my at-home time and go do something awesome.

Maybe I'll ... what's that? There is a new season of "Virgin River" coming to Netflix? Sorry everyone, I just got really busy. 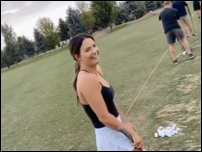 A swing and a miss: That's a perfect hole in one on this baby girl's laughter level.
×