OREM — Provo’s Los Hermanos will rebuild in Orem after a devastating fire destroyed the popular downtown restaurant in February.

The Mexican restaurant, previously located at 71 E. Center St., has found a new home at University Place on University Parkway after spending over 30 years in downtown Provo, becoming a staple eatery for those in the community.

“Three weeks ago today, we wept as we watched our beloved Downtown Provo location burst into flames,” Los Hermanos said in a post on Facebook. “(The restaurant was) a second home to the owners and some of the managers over the years. We searched for a space that would suit us in Downtown Provo, or closer to Downtown Provo, without any luck. Rebuilding was also not an option as the building was deemed a total loss and we were only leasing our space in Provo.”

The restaurant burned to the ground Feb. 11 after towels in a basement sink spontaneously ignited, fire officials said. The fabric of the newly-laundered towels can “become embedded with oils over their lifespan” and can self-generate heat — though that type of fire is “fairly uncommon,” officials said.

"There are lots of factors that have to come into perfect alignment for this type of fire, and in this case they did," Fire Marshal Lynn Schofield said.

The location of the fire made it difficult and dangerous for crews to battle, and one firefighter sustained a minor shoulder injury after falling down a flight of stairs. Luckily, no one was inside the restaurant since Los Hermanos had been closed for the day for flooring work.

Los Hermanos owner Craig Witham said he was in shock when he heard the news.

“Someone called us and we packed up and ran over here,” he said. “Smoke (was) coming out like crazy.” 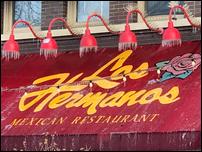 A landmark in Utah County had to stop taking reservations when a fire destroyed the historic Los Hermanos restaurant in Provo Monday night.

Long-time customers of the restaurant were also devastated.

“We’ve been coming here for since before we were married,” said Provo resident Teresa Henrie, who celebrated 17 years of marriage with her husband, Brian, the same week the restaurant burned down. “We were planning on coming for our anniversary on Friday, so we’re very sad.”

The Henries weren’t the only customers who mourned the restaurant’s loss, however.

“We’re just pretty much overwhelmed with how many people have come and expressed love and told us they’ll help us,” Witham said. "It’s really been great and eye-opening.”

Fortunately, Witham said both the restaurant and the building owner had insurance. A GoFundMe* for the restaurant has garnered nearly $3,500 to help rebuild, and now that’s becoming a reality.

“While we will be sad to leave, we are incredibly excited for what’s in store for us as we open this new chapter in Orem at University Place!” the restaurant’s Facebook post reads.