Covy Jones, Wildlife Program Manager for the Division of Wildlife Resources, said a group of bighorn sheep have lived in the area for several years and frequent the Cedar Hills Golf Club in the winter or when they want water.

Jones believes that the sheep had come down to the area near the end of March or beginning of April, as the spring had been particularly dry at that point. He said the herd is generally not a problem because most wildlife will avoid humans when possible, but one 2-year-old ram started exhibiting particularly aggressive behavior outside of the mating season, which is in November.

Resident Derrick Raynes captured video of the ram at his home. Raynes moved into the home on the northeast side of the golf course — the first house outside of the canyon — about two months ago with his wife and two-year-old daughter. He said the ram started hitting a back window within the week. 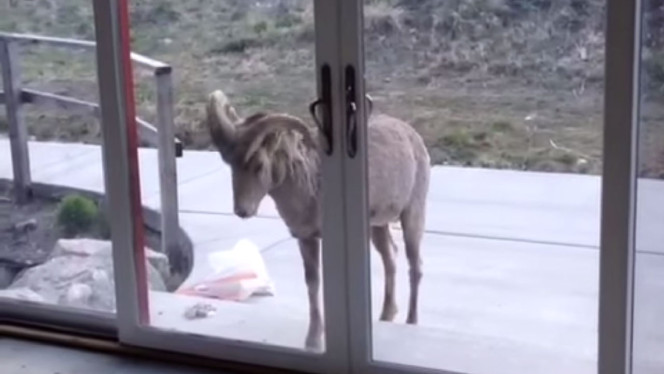 When the ram broke Raynes’ back window, he began to fear for the safety of his daughter and the other children in the neighborhood, and the DWR stepped in with attempts to harvest the ram.

Do you have a video featuring Utah people, places or events? Submit it through iWitness via the KSL.com app.

The agency found an archery hunter that was willing to harvest the ram, but the moving parts of laws restricting hunting within city limits and the difficulty of getting the ram to leave the area never lined up.

“It’s a three part (problem): Get the ram outside of the city, get the hunter there and have him connect with the ram, and we couldn’t get all three to line up,” Jones said. “As the situation progressed, and there continued to be public safety (concerns), it was decided that we would remove the ram.”

After the ram was captured and euthanized, a full necropsy was performed, but they “didn’t find anything wrong. Apparently he was just an ornery teenager,” Jones said.

Mark Hadley from the DWR said euthanizing the ram was a rare measure because the ram’s behaviour was “very unusual.”

“Bighorn rams — like most wildlife — will typically do everything they can to avoid people. I highly doubt anything like this will occur again in that area — or any area in Utah — for a long, long time.”