SALT LAKE CITY — Roughly a day’s drive from Salt Lake City, on the outskirts of a tiny town, lies a forgotten hotel. Originally built as a stagecoach stop in the late 1800s, the two-story adobe building hosted outlaws, rustlers and ruffians before shutting down during the Great Depression.

When the hotel closed, the owners sealed it up like a tomb. Original artwork still hangs on the walls and the guestbook is scrawled with the names of long-dead boarders.

Due to its remote desert location, and the fact that the same family has owned it all these years, very few people know the place exists. I first heard of it when a relative told me about a “ghost hotel” that contained a collection of historical curiosities.

I pushed for more information and eventually made contact with the property owner. He was friendly enough, though he seemed reluctant to agree to any kind of visit. I struck a deal with him: if he’d let me explore the old hotel, I’d promise not to share its location with others. The hotel’s secrets would remain intact.

After hours of driving, we reached our destination. The trouble was, we couldn’t find the hotel. If it had been in a Hollywood horror film, I’m sure it would’ve been a gothic structure perched ominously on a hilltop. Instead, it was a drab building hidden by thick trees. We passed it twice before realizing we’d arrived.

It was easy to see why the “ghost hotel” had vanished from maps.

While the building’s exterior may have seemed nondescript, we were stunned as soon as we stepped into the dark lobby. Like a filthy time capsule, it was loaded with relics going back more than 100 years. A mounted deer with deranged eyes peered down at us from above the large fireplace.

The lobby looked as though it hadn’t been disturbed in decades. Our footsteps didn’t echo — rather, they faded quickly in the musty air. Beneath our feet, we could hear the scratching and skittering of various critters. They seemed shocked by our intrusion into their realm. 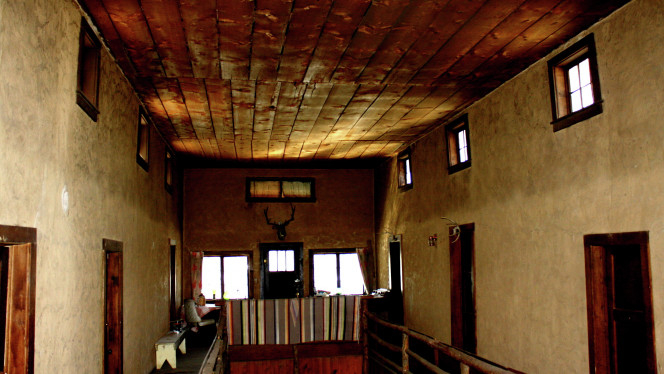 We spent half the day exploring the hotel’s sprawling labyrinth of hallways and hidden rooms. The floorboards on the second floor sagged precariously in many places and we wondered if they’d support our weight. But the allure of visiting each of the eight guestrooms kept us going. The original bedding was still in place and several rooms had tattered books on the nightstands.

We left the old hotel knowing this had been a once-in-a-lifetime opportunity. And while we’d kept our promise to leave everything just as we found it, we certainly took our share of souvenirs in the form of dust and spider webs that coated us head to toe.

Though you can't go there in person, experience this time capsule of a building by clicking through the image gallery.

Grant Olsen joined the KSL.com contributor team in 2012. He covers outdoor adventures, travel, product reviews and other interesting things. You can contact him at grantorrin@gmail.com.