Botanist discovers portrait of Shakespeare as a young man

That's what botanist and historian Mark Griffiths believes. He says that a drawing of a man on the cover of a 1598 book about plants is a picture of William Shakespeare.

If Griffiths' theory holds up, it would be a major find — and it's being trumpeted as such by the UK magazine Country Life, which is revealing the discovery in its new issue.

It's "the literary discovery of the century," Country Life editor Mark Hedges told the UK Guardian. "This is the only known verifiable portrait of the world's greatest writer made in his lifetime. It is an absolutely extraordinary discovery; until today, no one knew what William Shakespeare looked like in his lifetime."

There are only two verified likenesses of Shakespeare known today, both from after his death in 1616. One is the famed one of a balding man in a wide collar, taken from the First Folio, published in 1623. The other is a memorial at a church in his hometown of Stratford-upon-Avon.

If the man on the book, "The Herball," is Shakespeare, he would have been in his early 30s and would have already written a number of the plays based on English kings, including "Richard III" and both parts of "Henry IV." Still in his future were "Hamlet," "Othello," "King Lear" and "Macbeth," all of which probably date from the early 1600s.

To determine that the picture is Shakespeare, Griffiths had to unlock some elaborate Elizabethan codes, he told the Guardian. There are four men pictured on "The Herball," and he figured who three of them were relatively easily: the book's author, John Gerard, the subject of some Griffiths research; botanist Rembert Dodoens; and royal minister William Cecil, Lord Burghley.

But the fourth took some doing. 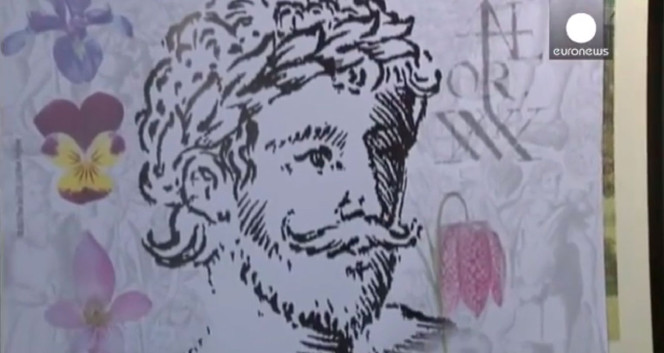 "He's dressed as a Roman, wearing laurels and meant to make us think of Apollo and poetry. ... I couldn't think of anybody really who was a direct intimate of Gerard's and was involved in writing his book," he told the Guardian.

Through a variety of clues, including an arrowhead, a peculiar flower and a W, Griffiths deduced that the man was Shakespeare.

Hedges believes the theory is correct. "The more you find out about the story, the more it glues together," he said in a Country Life video.

But not to a number of experts.

"There's no evidence that anybody thought that this was Shakespeare at the time," professor Michael Dobson, director of the Shakespeare Institute at the University of Birmingham, told the BBC.

And in a Guardian essay, art critic Jonathan Jones compared the theory to something Dan Brown would have come up with: "fanciful tosh."

"There is no 'proof' at all here that the moustachioed man in the engraving is Shakespeare," he wrote. "His complex strings of argument are massive acts of overinterpretation."

Griffiths, though, is convinced.

"It is not an assumption that he is Shakespeare, it is algebra. ... It is an equation," he said.

Interpretation, then, may be in the eye of the beholder.

Or as Shakespeare wrote in "Antony and Cleopatra," "In nature's infinite book of secrecy / A little I can read."