CEDAR CITY — The Utah Shakespeare Festival in Cedar City is an annual tradition for many Utah theater lovers. If you've never attended this award-winning event, now is a great time to plan a visit. The 2013 season has just begun.

Whether you are a first-timer or a veteran theater lover, here are five reasons to visit the Utah Shakespeare Festival this year:

The Utah Shakespeare Festival, now in its 52nd season, received a Tony Award in 2000 for outstanding regional theater. It was no surprise for those who had been attending the festival for years.

The Utah Shakespeare Festival produces six professional plays each summer — typically three by Shakespeare and three by other playwrights. Two or three other plays are performed during the fall season.

Where: On the campus of Southern Utah University in Cedar City, Utah

How much: $16 to $72 per show, depending on theater and seat. The theaters are small enough that most seats are good. Shows are less expensive Monday through Wednesday. The green show is free.

How long: A few hours or a few days.

The atmosphere and dress code at the Utah Shakespeare Festival is casual. You can be comfortable in shorts or slacks.

Serious theater lovers can attend seminars, post-play discussions, backstage tours and showings of new plays and more. Immerse yourself in theater or just get your feet wet. It's up to you at the Utah Shakespeare Festival.

Look no further than the Utah Shakespeare Festival for a romantic but relaxed couples getaway. Here is a sample itinerary.

Day 1 — Arrive in Cedar City and check into a romantic B&B, or one of the many hotels in town. Cedar City offers lodging and dining to fit nearly any taste and budget.

Day 2 — Enjoy the festival. See the matinée and evening performances. Come early to the evening show for orientation and the green show.

Day 3 — Visit one of the national parks (see below). Bryce Canyon or Cedar Breaks will be cooler in the summer. Zion National Park is at its best in the fall.

If you have more time, see more of the festival's productions or another of the national parks. You could easily spend a week or more visiting the festival and the area's many other attractions.

4. Fun for families, too

Traveling to southern Utah as a family? The Utah Shakespeare Festival is family-friendly. 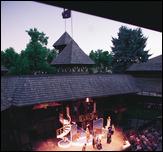 The Utah Shakespeare Festival and Southern Utah University received a $6 million gift from the Sorenson Legacy Foundation, taking the university and festival one step closer to creating a unique art center that's been in the works for years.

The green show is a short, free show with entertainment for all ages. It features singing, dancing and comedy from England. The green show plays every evening during the summer season at 7:10 p.m. on the small stage just outside the Adam's Theatre. All seating is on grass. Come early for a good spot.

The Utah Shakespeare Festival has shows that school-age children should enjoy. This year, they can see "Peter and the Starcatcher," which is based on a popular children's book.

All shows at the festival will be appropriate for most teens, though parents are encouraged to familiarize themselves with the plays before ordering tickets. Try "The Tempest" or "Love's Labour's Lost" for Shakespeare novices.

The Utah Shakespeare Festival offers a licensed baby-sitting service, for a fee. Children under the age of 6 are not permitted to attend the productions. A pet boarding service is also available.

Cedar City is an excellent hub for visiting the world-class scenery of southern Utah. The towering cliffs of Zion National Park are less than an hour away. The iconic hoodoos of Bryce Canyon National Park are about a 90-minute drive from Cedar City. Cedar Breaks National Monument is about 30 minutes away, via Cedar Canyon.

Tuacahn is also within an hour's drive of the Utah Shakespeare Festival. This theater venue is offering productions such as "Mary Poppins," "Starlight Express," Disney's "Mulan" and "Thoroughly Modern Millie" played in an outdoor amphitheatre set against the gorgeous red rocks of Snow Canyon.