MURRAY — Friends and family members of a woman missing for 12 days made a plea to the public Thursday to help find their missing loved one.

Louder has not been seen since Sept. 27. She had recently lost her job. And Murray police say in the 24 hours leading up to her disappearance, she exhibited unusual behavior.

She called 911 from her cellphone in her condominium about 9 p.m. on Sept. 26 reporting a "large fight" at the complex clubhouse, near 5500 South and 500 East. When officers arrived, they found a wedding reception but no fight.

Later that night, she called 911 again from her cellphone, but quickly hung up.

At 8:18 a.m. on Sept. 27, Louder made a third 911 call from her condo, saying it was being burglarized. Police say dispatchers could hear her in the background yelling at people to leave. But her roommate told police there was no one else in the residence and detectives later found no evidence of a break-in.

"We've racked our brains, and this behavior of hers is very not typical. I can't explain the phone calls," said Tim Asay, who has known Louder for 20 years.

There are also two surveillance videos from Louder's condominium complex that capture her. One recorded her outside her condo at 3:30 p.m. on Sept. 27, apparently having an animated conversation with herself, according to police. The second was at 5:45 p.m., showing her walking out of her residence barefoot and wearing a tank-top.

Police say that was the last known location of Louder. She left her cellphone and keys behind, and her beloved family dog. Investigators fear she may be delusional.

Family members say Louder does not have any diagnosed mental illness and they were unaware of any medications she may have been taking. Whether she simply walked away, was planning on meeting someone, got a ride or exactly what happened to her is unknown.

"There are a million and one scenarios running through each one of our heads, and just trying to find the correct lead is where we're going with now. We're hoping and praying we find that one correct lead that will lead us to her and lead her home," Asay said. "There was never any reason. She never gave me any concern. So this is not typical behavior for her. That's the scariest part for me, that this is not typical behavior."

Family members say Louder was "kind of a quirky cousin" who was very social in talking to everyone, even her dog. But she was also a homebody who loved to watch movies or play board games. The day she went missing, the family believed she had plans to stay home and update her resume. 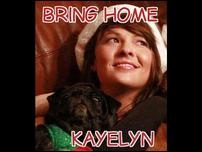 The mysterious disappearance of a Murray woman is gaining national attention and the search for her in Utah is intensifying.

"I talked to Kaylyn that day that she went missing. She seemed just fine to me," her mother said while calling her disappearance "the biggest nightmare we've ever had in our lives."

Police have found no evidence of foul play.

Family members organized a search for 2 p.m. Thursday. Volunteers were instructed to meet at Murray Park. The family has also hired a private investigator to help with the search.