Have you seen this? Action Movie Kid 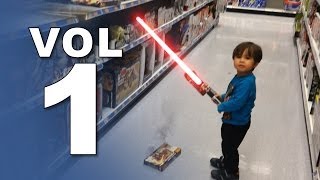 IMAGINATION PLACE — Remember when you were a kid and an empty wrapping paper roll became a light saber and almost any stick became a gun? Those were some good times.

But if your dad works as a special effects artist for DreamWorks in Los Angeles, those good times are not only caught on film, but you get to become “Action Movie Kid.”

"I made them mostly because he is really funny and imaginative," Hashimoto told the New York Daily News. "James doesn't watch TV or movies very much. We play tons of games with him throughout the day."

Subsequently, the special effects have shown James wrecking* his living room with a Duplo blocks gun, skydiving out his front door to preschool, avoiding floor lava by jumping on the furniture, disappearing into another dimension through a puddle, destroying a store shelf with a light saber and much more.

Hashimoto releases the 10-second videos individually, but he is compiling them into volumes for viewing ease.

*No toddlers or property were harmed or damaged during filming.